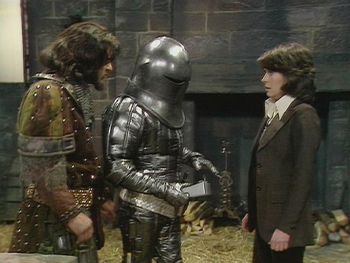 See the person on the far right? One-off character for sure.
"A longshanked rascal with a mighty nose!"
— Irongron describes the Doctor
Advertisement:

The one where Middle Age warlords meet a talking potato. The one where we meet the woman who first etched herself on the Doctor's hearts.

An intrepid investigative journalist, Sarah Jane Smith, infiltrates a secret research centre where a number of top scientists are being held in protective custody while UNIT investigates the disappearance of some of their colleagues; the Doctor will like this companion, we're sure.

The Doctor follows the trail back to The Middle Ages in the TARDIS; unbeknownst to him, Sarah Jane has stowed away on board. It seems that a robber baron called Irongron has made a deal with Linx, a Sontaran of the Sontaran Army Space Corps. Linx gives Irongron advanced weapons in exchange for time and shelter while repairing his damaged spacecraft. The kidnapped scientists are working under hypnosis to help.

The Doctor helps local lord Sir Edward of Wessex to repel an attack by Irongron's men, then drugs the food in Irongron's castle in order to remove the advanced weapons while they sleep. With the help of one of the scientists, the Doctor then sends the scientists back to the 20th century.

Linx kills Irongron and is about to leave when he is shot in the back of the neck with an arrow by Hal, one of Wessex's archers. Turns out that's the only weak spot on a Sontaran's armour - the "probic vent" - and he dies. The Doctor, Sarah and Hal escape before the ship can explode and destroy Irongron's castle.

The only Pertwee serial in a historic setting instead of a contemporary or futuristic one, "The Time Warrior" pioneered the "pseudo-historical" format — stories set in the past but with a science-fictional element (although it should be pointed out that this had already happened before with the First Doctor in "The Time Meddler" and to a lesser extent with the Second Doctor in "The Evil of the Daleks" and "The Abominable Snowmen").

This story also sees the debut of a new title sequence, replacing the version that had been used since Jon Pertwee's debut in "Spearhead From Space" four years earlier. Whereas the previous version had gone through the entire spectrum of colours, the new version was predominantly blue. It would also be the only version of the opening titles to include a full body shot of the Doctor rather than just his face. Concurrently with the new title sequence, the serial also marks a shift to calling individual episodes "parts" rather than "episodes," a practice that would remain in place for the remainder of the Classic Series (with the sole exception of "Destiny of the Daleks", which reverts to the "episode" labelling system).

In the 1990s, Barry Letts wrote "The Paradise of Death" for BBC Radio 5, which takes place between this story and the next and stars the Doctor, Sarah Jane and the Brigadier.