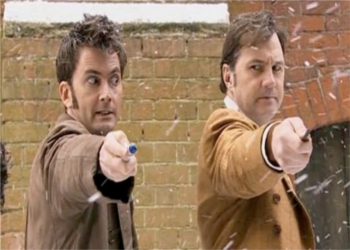 Except not.
"I'm the Doctor. Simply the Doctor! The one, the only, and the best."
— The Next Doctor
Advertisement:

The one with the one that's not the one.

The one with (literally) Not!Matt Smith.

Visiting 1851 London on Christmas Eve for the sheer hell of it, the Tenth Doctor hears someone screaming his name. Grinning madly, the Doctor speeds to the scene of trouble and finds a young woman in distress — only to be scoffed aside by her. Instead, a guy played by David Morrissey shows up, claiming to be the Doctor. Ten looks at what he assumes is a future incarnation... but both are immediately interrupted by the trouble that united the two Doctors in the first place: a Cyberman... cat... hybrid called a "Cybershade". One awesomely silly chase sequence later, the pair of Doctors are fast friends and the young woman is introduced as Rosita, this Doctor's companion. But Ten is worried: the Next Doctor hasn't recognised him one bit. Not wanting to accidentally mess with the 1851 Doctor's fragile memory, Ten introduces himself as "John Smith".

Chasing after the Cybershade, "John" and Next Doctor end up in a house filled with futuristic technology. Ten describes some tube-looking devices as "infostamps", and realises that the Cybus Industries-produced Cybermen must be here in force after falling through the Void, together with some stolen Dalek technology. He also notices that Next is wearing a fob watch, and quickly puts two and two together, realizing this could be him in human form... but no, it turns out to actually be a perfectly ordinary, broken, fob watch. Next explains that he lost his memory while "regenerating".

The infostamps seem to mean that the Cybermen are a little lost and need help — absorbing information of the era and their enemies to replenish their collective memory banks. Of course, the pair of Doctors end up running into the Cybermen, and "John" blows his cover, announcing himself to the Cybermen as the real Doctor, while Next suddenly remembers how he dealt with Cybermen last time and kills them with an overloaded infostamp. Ten comments that Next had a great idea, but claims he was just lying a bit about being the Doctor to protect Next. He also decides to simply check Next's chest for his number of hearts, but we don't find out just yet what the answer is.

With that out of the way, it's off to the Next Doctor's TARDIS, a Tethered Aerial Release Developed In Style (essentially, a hot air balloon made out of household ingredients). Ten loves it. Nearby, the Next Doctor and Rosita are staying in a large stable, alongside the luggage and belongings of Jackson Lake, a victim of the Cybermen. As it turns out, the Cybermen have been kidnapping people in the night, with Miss Mercy Hartigan, the matron of the St. Joseph's Workhouse, making damned sure that the Cybermen get their guy. And, coincidentally, Jackson Lake was their first victim.

The Tenth Doctor begins to put things together rather quickly, especially when he notices Jackson Lake's initials engraved into the Next Doctor's fob watch. As it turns out, the Next Doctor isn't a Time Lord at all, but Jackson Lake himself. The original Doctor tells him and Rosita about the Battle of Canary Wharf and how the Cybermen were cast into the Void. However, they managed to escape from the Void when the walls of the universe were weakened by the Daleks' abduction of the planets, and found themselves in London in 1851. They soon came upon Jackson Lake, at the time an ordinary mathematics teacher. The Cybermen attacked his home and killed his wife. In desperation, Lake grabbed an infostamp to defend himself, one containing information on the Doctor gleaned from the Daleks; though the infostamp destroyed the Cybermen, it backfired and overwhelmed Lake's mind. In his fear and despair after losing his wife, he came to believe he was the Doctor.

Understandably, Jackson doesn't take this well — believing he was completely a fake. The Doctor says otherwise, pointing out what Jackson's done isn't the result of the Doctor being imprinted on him, but the result of Jackson himself being awesome.

The conversation is interrupted by a commotion from outside. The Doctor and Rosita race out to see what's going on, while Jackson decides to stay behind. He figures that he's not worthy of helping the Doctor. The Doctor and Rosita find processions of children from the workhouses of London being led away by men controlled by steampunk Cyber earpods. Finally, the Doctor and Miss Hartigan come face to face, and the Cybermen update their records as to who the Doctor is with a fixed infostamp and slowly march in. Looking somewhat worried, the Doctor tries bargaining with the Cybers... until blasts of electricity rip into the Cybermen from offscreen, utterly destroying them. A quick turn to the source of those blasts reveals...

...Jackson Lake standing in a high position, wearing a bandolier of infostamps around his chest and grinning at the Doctor.

Jackson comments that he still feels like something else is missing, but he just can't sit on the sidelines while the Doctor's in danger. Finally, the Doctor, Rosita and Jackson break into the main base of the Cybermen and find out what's going on. But not before Miss Hartigan is turned into the Cyber Leader of the Week. The children are being used to put the finishing touches upon what is only known as a "CyberKing", and it's just been finished. Since the Cybermen are done with the children, the facility begins to self destruct. Wasting no time, our trio begins to rush everyone out... and then Jackson Lake recovers another memory, and realises what was still missing: when the Cybermen attacked his house, they kidnapped his son Frederic, right after they killed his wife. Luckily, the Doctor saves the poor young Lake, and everyone escapes and has a Merry Christma–

...wait, why is there a giant Steampunk robot rising up from the Thames River? That's a CyberKing?

While Jackson and Rosita help everyone slowly evacuate London by running with them, the Doctor leaps into Jackson's TARDIS and flies up into the skies. He takes along a piece of Dalek technology salvaged from the Cybermen base, and the rest of those infostamps. To his surprise (and a bit of delight), Miss Hartigan is driving the CyberKing with her mind. She's one of the cleverest humans that ever lived, and she's completely taken over the Cybermen with the sheer force of her own will. And now she wants to take over the world. As is the tradition for the Tenth Doctor, Ten offers Hartigan a chance to live in peace (albeit on another planet with no life to take over) and marvels at what an extraordinary human she is. Of course like clockwork, Hartigan refuses, so the Doctor blasts her with the collective group of infostamps, boosted by a handy sonic screwdriver. Rather than directly killing Miss Hartigan, though, it simply frees her mind from the Cyber-conditioning she's undergone. Needless to say, she freaks out, the Cybermen turn against her, and the CyberKing begins to topple as she and the Cybermen slowly explode... and fall on top of London.

Luckily the chunk of Dalek tech is a handy key to send it into the Time Vortex, where it seemingly blows up harmlessly. Jackson Lake gets up on a lamppost and begins to preach to the crowd about how the Doctor has just saved them all, and how he deserves applause just this once. Of course, the crowd obliges.

Finally, the Doctor tries to sidle off to his own TARDIS and leave, but Jackson follows. The Doctor offers to take Jackson along with him, but he only limits himself to a quick look inside the real TARDIS, which his mind can barely handle. He absolutely insists that the Doctor join the Lakes and Rosita for Christmas dinner. The Doctor tries to weasel out of it, like he does every Christmas. But Jackson is persistent enough to change the Doctor's mind, a rare feat. Wishing one another a Merry Christmas, the camera slowly moves off into the snowfall... which is, for once, actual freaking snow.

This episode is significant to the show's history as it is the first revival-era episode to actually show moving images of the first eight Doctors, confirming a direct line of continuity to the original series (which up to this point had still been a matter of debate), and most significantly including footage of the Eighth Doctor from the 1996 TV movie; although an image of Eight had been seen previously, this was the first to confirm that the movie actually occurred within canon.

In addition, it was around this time that both David Tennant and Russell T. Davies announced their departure. With them out and Steven Moffat in, it was decided to air five episodes filmed as part of the Series 4 production block on four holidays throughout 2009, as part of a transition from one production team to another. While technically a miniseries in their own right, these episodes are considered part of Series 4 on this wiki for completist purposes.

Alternative Title(s): Doctor Who NSS 4 E 14 The Next Doctor