Make Wrong What Once Went Right 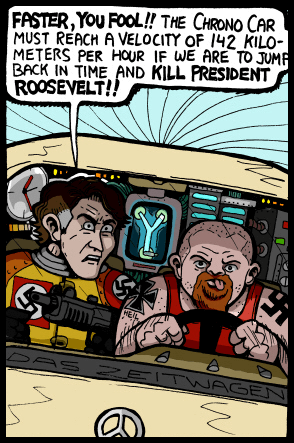 Unfortunately for them, they picked the wrong President Roosevelt.
"With the clock under my control, I'll be able to wrong all the rights in the universe. Every villain who's ever stumbled will get a do-over. Every protagonist's triumph will be reversed! Until finally, a new present is created! In which the heroes always lose!"
— Dr. Nefarious, Ratchet & Clank Future: A Crack In Time

Most time travelers have a motivation. Usually, they're trying to Set Right What Once Went Wrong. But there are many who are out to do the exact opposite: Make Wrong What Once Went Right. They could be anything from a time-traveling Stupid Jetpack Hitler to a nefarious Conqueror from the Future, a (not necessarily but usually) Manipulative Bastard who wants to rearrange history in his favor, or a Jerkass who decides to mess with time for his own entertainment. Sometimes a traveller with these goals is a protagonist: in this case, they are generally of the third kind. When paired up or teamed with a more ethical time traveler hilarity can ensue.

Note that it does not need to be 'setting wrong' from the point of view of the traveler himself, e.g. a time-traveling Neo-Nazi from the year 4242 would have no qualms with making the Nazis win WWII.

This sort of activity is often opposed by the Time Police or a Terminator Twosome, although sometimes they are guilty of it themselves. Usually fits with Villains Act, Heroes React.

When Dr. Nefarious discovers the existence of the Great Clock, he intends to use it to undo his and every other villain's defeats,

When Dr. Nefarious discovers the existence of the Great Clock, he intends to use it to undo his and every other villain's defeats,