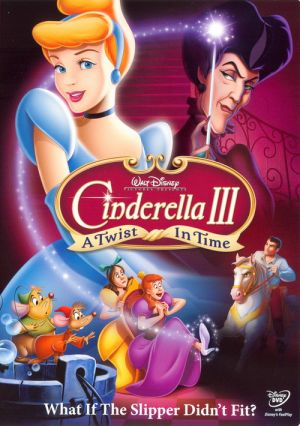 "I can't live in dreams if my dreams are to come true."
— Cinderella
Advertisement:

A 2007 Direct to Video sequel to the Disney Animated Canon hit Cinderella and Cinderella II: Dreams Come True. It bears a resemblance to Twice Charmed, and was made after it.

Cinderella is living her happily ever after with her friends and her prince, while her despicable stepfamily have fallen on hard times. But then Lady Tremaine gets ahold of the Fairy Godmother's magic wand. She uses it to turn back time to the day the Grand Duke arrives with the slipper and has it pan out perfectly—for her.

Suddenly, Cinderella doesn't escape the tower in time, the shoe fits her stepsister Anastasia, and Prince Charming is brainwashed to think she's the one he danced with. Now Cinderella has to fight for her happy ending, or she might lose it forever. Not to mention, Anastasia finds herself swept in her mother's plans, and marrying a man who doesn't really love her soon becomes a wake-up call...

Cinderella III stands as the last full-length DTV DAC sequel released before Walt Disney Animation Studios CCO John Lasseter's ban on DTV sequels and prequels took effect.* In between Cinderella III and the start of the ban, DisneyToon did churn out a compilation of shorts, Disney Princess Enchanted Tales: Follow Your Dreams, and a prequel to The Little Mermaid, Ariel's Beginning.

Lady Tremaine casts a spell on the Prince, causing him to forget meeting Cinderella and marry Anastasia that night.

Lady Tremaine casts a spell on the Prince, causing him to forget meeting Cinderella and marry Anastasia that night.