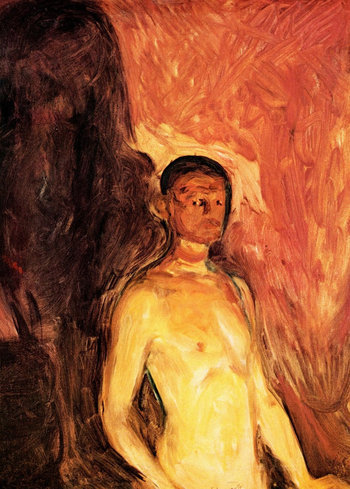 Self Portrait in Hell

Edvard Munch (12 December 1863 – 23 January 1944) was a Norwegian artist (painter, printmaker, sometime photographer…) working in the 19th and 20th centuries. He broke with convention in a number of ways, in general turning his back on verisimilitude in his figurative art in favor of showing how things looked and felt to him. In this he would be a great influence on the Expressionist art before, during and after World War I and modern art in general.

It is sometimes debated whether Munch was as angsty and troubled as he let on, or whether he was an expert self-dramatizer. Available evidence suggests that both things are true. In either case, since his best-known work is entitled "The Scream"—and for good reason!—we can regard this as an essential component of both his personality and his work.