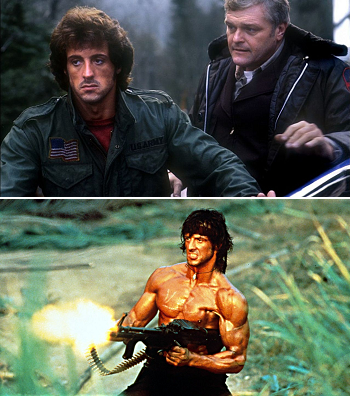 A new film franchise has a lot of work to do. In only a couple hours, you have to introduce the characters, the premise, and all the Phlebotinum you're going to be using for the rest of the series, and you need to have a plot to tie it all together. Because of this, the first installment in a film series tends to be slower paced.

Starting with the second film, though, the Back Story is already established, everyone has already met everyone, and the budget for the movie is often much larger, allowing it and subsequent sequels to fall increasingly into the 'Action' genre, even if the original didn't have that much action. If it did, the sequels become outright over the top in their action.

Tends to happen with horror films. Occasionally, as with Alien, it's because the director feels the first was perfect and tries to do new things — which ironically in Aliens's case made it an Even Better Sequel. Other times, it's because anyone who survives a horror movie graduates with a few levels in badass, and when you put an Action Hero into a horror movie, it becomes an action movie.

This can also happen in some video games, particularly those in the horror genre. Often, the first installment will be based on survival, not combat, and encourage you to avoid the enemies rather than fight them directly. Possibly in an effort to appeal to a wider audience (after all, survival is hard, but blasting shit is fun), subsequent games will add more ammo and weapons, or go into a full Genre Shift. Of course, it can happen to other genres as well — as technology has improved, the RPG genre as a whole has become faster paced and more action-oriented, for example.

For series that already started out action-y and continue to escalate from there, see Serial Escalation.