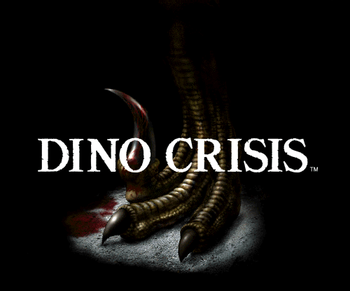 Dino Crisis is a Survival Horror game series by Capcom that debuted in 1999. The first game had a lot of similarities to the company's other survival horror series, and came bundled with a demo of Resident Evil 3: Nemesis. Capcom originally insisted it was a new genre they called "panic horror" because you fight dinosaurs. The game was created by Shinji Mikami, of Resident Evil fame, and written by Shu Takumi, who would go on to create the Ace Attorney series.

Dino Crisis was popular enough to earn a sequel, Dino Crisis 2, in 2000. The sequel made the gameplay much more action-oriented, but kept Regina as a main character, and received good reviews. After that, the franchise received a Light Gun installment in 2002 called Dino Stalker. Capcom released Dino Crisis 3 in 2003 on the original Xbox, with a completely new cast and a space setting. Unfortunately, terrible camera controls, fan backlash, and the small audience for the game on the Xbox killed the franchise.

However, the main character of the original two games, Regina, does appear in the 2005 crossover game Namco × Capcom and as a costume in the DLC for 2013's Dead Rising 3, and the "Borginian Republic" the first game takes place in is reused in various parts of the Ace Attorney franchise (make of that what you will).

Please note that the series were made before many important paleontological breakthroughs were discovered (and also took a lot of inspiration from Jurassic Park), so the dinosaurs have a pretty dated design (the most glaring of which are the lack of feathers and pronated hands).

Now has a developing character page.

The series consists of (in order of release):

open/close all folders
Dino Crisis
A team of soldiers from the clandestine Secret Operation Raid Team is sent to capture Doctor Kirk, a genius scientist who had allegedly died in a lab accident, but instead used it as a chance to defect. Kirk's work involved "Third Energy Theory'', which caused a rift in the Space-Time continuum, bringing dinosaurs into the present day. Players take the role of Regina, a S.O.R.T. member who is attempting to survive the island, whilst her squad mates debate on whether or not to pursue Kirk or abandon the mission and escape.

Dino Crisis 2
A Third Energy research outpost disappears and is replaced by Prehistoric Jungle. Regina and new character Dylan Morton are sent to investigate, running afoul of both the dinosaurs, and a mysterious group of teenagers wearing futuristic gear. The game is notable for having a more action-oriented focus than the original (which was primarily Survival Horror), to the point of including a combo meter and a ingame currency system based on kills (similar to Devil May Cry, released a year later).

Dino Stalker
Also known as Gun Survivor 3: Dino Crisis. A first-person shooter starring Mike Wired, a World War II pilot who becomes stranded in the dinosaur-ridden future thanks to the timeline meddling that occurred in the earlier games.

Taking place in the Twenty-Sixth Century, players take the role of Patrick Tyler as he investigates the U.N. Ozymandias, a spaceship that had disappeared centuries earlier. Along with Sonya Hart and Jacob Ranshaw, he fights mutants based on Dinosaur genetic codes.

"This isn't a joke, you idiot! I was just attacked by a big-ass lizard!"