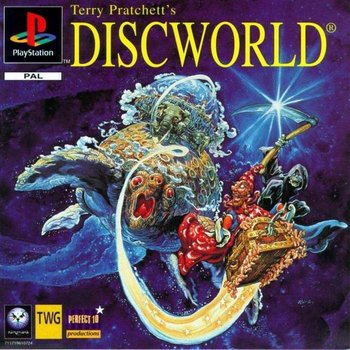 A Point and Click game based on Terry Pratchett's book series of the same name, developed by Teeny Weeny Games and Perfect 10 Productions and released by Psygnosis in 1995 for the PC and PlayStation. This game in question is very loosely adapted from Guards! Guards! with a lot of setting elements from Moving Pictures. It features the character Rincewind (voiced by Eric Idle) and the Luggage trying to stop a dragon summoned by an evil Brotherhood.

Pratchett's style of humour is incorporated into the game, making for various funny moments along the way. This game is also noted for being very difficult, with explanations not being given for the majority of the puzzles, meaning that often you will have missed one thing that looked like part of the scenery that could've been picked up.

A sequel, Discworld II, followed up a year later.