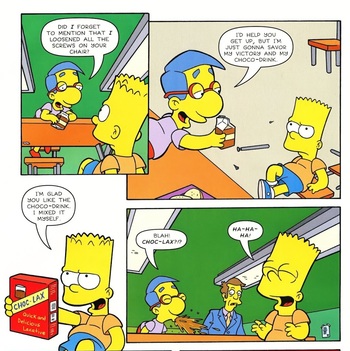 Richard: Northwestern, I am the shit.
Gwen: You certainly will be.
— Van Wilder

Sometimes people want revenge on someone or to cheat in a contest. One thing they do is put laxatives in their drink or food. Why laxatives? Because ideally one of two things will happen:

In fiction this is normally Played for Comedy, but occasionally it is Deconstructed to emphasize the dangerous dehydration element of it.

A frequent variation is using something that induces vomiting rather than defecation.

Do Not Try This at Home. Seriously, don't. This is illegal and incredibly risky in real life. The victim could end up seriously ill, hospitalised or worse. Dehydration is also not the only risk: the person could be allergic to the laxative or its inert ingredients (particularly soy, an extremely common allergen that is often used as a binder) or could even suffer a ruptured appendix or internal bleeding. The induced vomiting variant can cause internal bleeding, and is actually far more likely to do so than a laxative. Consequently, administering even such a seemingly-trivial pharmaceutical drug to someone without their knowledge is classified as a serious criminal offense in many jurisdictions—the perpetrator of the prank could face serious criminal charges—and in most jurisdictions this act would also constitute civil battery, or at least gross negligence (or the local equivalent), opening up the possibility that the victim could sue for damages (including, in many places, punitive damages).

There is also a variation involving over the counter eyedrops that ostensibly have the same effect. This is even more dangerous as ingestion of the active ingredient in the drops can cause a range of dangerous symptoms up to and including sending the victim into a coma, with diarrhea being the least likely symptom.

Compare Slipping a Mickey, which is basically this trope but with drugs.