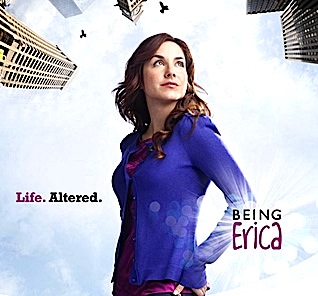 Dr. Tom: I asked you a simple question. Do you want to fix your problems or not? Yes or no.
Erica: Yes.
Advertisement:

A Canadian comedy-drama series about a 30-something woman named Erica Strange (Erin Karpluk), who believes her life has been full of regrets. After a particularly bad day, she is approached by a therapist called Dr. Tom (Michael Riley). He offers assistance, which turns out to be in the form of sending her back in time to relive portions of her life. While this is supposedly to allow her to make changes, often the result is that key events happen anyway, but they give Erica a fresh perspective which can then be applied to present day situations.

Episodes typically begin with events in the present (and occasionally a monologue), which may involve her family, friends, or co-workers. At some point, Erica ends up in Dr. Tom's office, after walking though an otherwise normal doorway. This leads to her revisiting a past regret. Generally, the episode concludes with a return to the present storyline, some aspect of which can now be seen in a new light.

The show premiered on CBC in January of 2009. It was picked up for a twelve-episode second season that started September 2009, and a thirteen episode third season that began in September 2010. Later seasons introduce more therapists and more patients to the cast. The series takes place in Toronto, where it is also filmed. The last episode aired in December 2011.

There are currently plans for UK and US versions of the show, although nothing has materialized yet.

Example of:
Really Gets Around