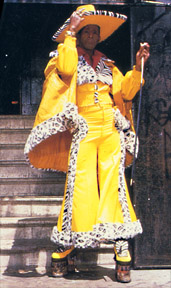 That's right sucka; this guy is gonna git you.
Blair: He's a pimp? Where's his fur coat? And his cigar? And his purple hat?
Jo: Maybe it's his first day.
— The Facts of Life, "Runaway"
Advertisement:

The standard attire for all men who... help young women earn money for college. You know, managers in the intimate entertainment industry. Guys who... how shall we put this?... manage a harem of prostitutes. Pimps. Street walkin', jive talkin', bitch slappin', bling wearin' pimps. This is their uniform:

All parts of the uniform should be an exceptionally bright color. Purple, orange and white seem to be popular choices, but pretty much any color other than black, brown or grey can work, so long as it shines brighter than the Las Vegas strip.

Wearing one of these outfits can also get completely innocent people confused with pimps.

Kinda Truth in Television — you can't really identify a pimp on sight this way, but the idea has a basis in reality.

Not to be confused with Rainbow Pimp Gear, which is a video game trope for wearing items purely to get the best bonus, no matter how outrageous they look together.