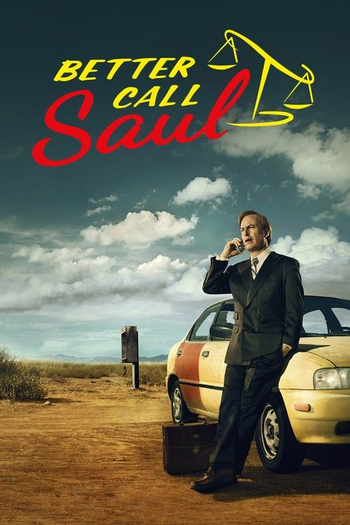 Better Call Saul is an American courtroom drama television series from AMC which premiered in February 2015. A prequel to Breaking Bad, it centers on the past of Ambulance Chaser and notorious mob lawyer Saul Goodman (Bob Odenkirk). The show's sixth and final season premiered in April 2022.

Before he was Saul Goodman, he was Jimmy McGill, a hardworking attorney struggling to find clients receptive to his slick charm and loose ethics. Complicating matters is his ailing brother Chuck (Michael McKean), a brilliant, if officious, senior lawyer whose bizarre and isolating condition forces his sibling to take care of him.

Jimmy finds a kindred spirit in his ambitions with his girlfriend Kim Wexler (Rhea Seehorn), a junior attorney at Chuck's law firm Hamlin, Hamlin & McGill, whose ironclad moral code and fondness for Jimmy's antics often complicate her career. His search for clients that will boost his solo practice, and his attempts to join HHM, are foiled by Chuck's successful and smarmy law partner Howard Hamlin (Patrick Fabian).

All three are well aware of Jimmy's weakness for doing what's easy over what's right, and as his situation changes and his loyalties shift, he becomes less interested in rising above his reputation from his days as con artist "Slippin' Jimmy" back in Cicero, Illinois - and more interested in becoming someone much worse.

Meanwhile, recent events have forced Mike Ehrmantraut (Jonathan Banks) into an early retirement from the Philadephia PD, moving to Albuquerque to pursue a quiet life as a doting grandfather. His concerns over providing for his family - as well as trauma after a recent loss - begin to push Mike towards less lawful pursuits, where his professionalism and specialized skillset make him a highly-demanded commodity.

Despite their best efforts, both Jimmy and Mike become acquainted with the power players of the Albuquerque underworld, especially due to their dealings with an ambitious cartel associate by the name of Nacho Varga (Michael Mando)...

This is the recap page.

Only spoilers for the later seasons will be whited out (and even that isn't 100% guaranteed). You have been warned.

Chuck sets his house on fire with no one else around but him inside.

Chuck sets his house on fire with no one else around but him inside.