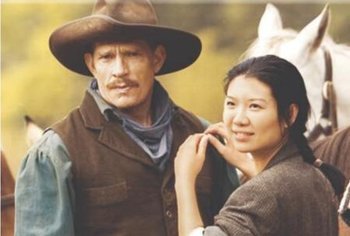 Broken Trail is a made-for-TV movie directed by Walter Hill and first broadcast in 2006 on AMC. It is, to a large extent, a vehicle for Robert Duvall, who gets to play his favorite role, that of the grizzled, world-weary but honorable cowboy. The film is thus considered part of Duvall's informal Western trilogy, whose first two instalments were Lonesome Dove and the Kevin Costner-directed feature movie Open Range.

The story takes place in 1898. Duvall, as old rogue Print Ritter, and Thomas Haden Church, as his nephew Tom Harte, are driving Oregon ponies to Wyoming, where they are going to be sold to a horse trader working for the British army, who need mounts for the Boer War in South Africa and are paying top dollar. On their way, they come across five young Chinese women who have been sold into prostitution and are being taken to their new owner, a ruthless madam in a mining town. Ritter and Harte rescue the women from their sordid fate and decide to take them to safety.