Film / A Bullet for the General 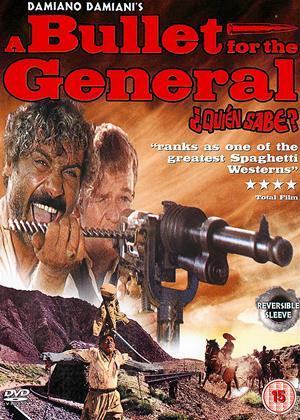 A Bullet for the General aka El Chuncho, quién sabe? is a Spaghetti Western from 1966, directed by Damiano Damiani.

A gang of bandits led by El Chuncho rob a train, and one of the passengers, a young American called Tate, ends up joining the gang. Chuncho nicknames him Niño, and they gradually become friends.Chuncho intends to sell the guns they acquired through the robbery to a revolutionary Mexican general, and Tate helps the gang plan and carry out several raids to get more guns. Despite his original mercenary motives Chuncho becomes more and more invested in helping the villagers fight their oppressors, but it becomes apparent that the manipulative Tate had his own reasons for joining the gang - and aiding the revolutionaries wasn't one of them.

The cast includes Gian Maria Volontè (who played two different villains, Ramon Rojo in A Fistful of Dollars and El Indio in For a Few Dollars More), Klaus Kinski, and Lou Castel.