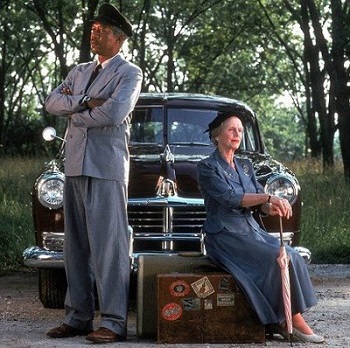 Driving Miss Daisy is a Pulitzer Prize winning 1987 play by Alfred Uhry, later adapted for the screen by its playwright and director Bruce Beresford, into a 1989 comedy-drama film and 1989's Best Picture Academy Award winner. The film also made Jessica Tandy, age 80, the oldest winner of the Best Actress Oscar.

This play chronicles 25 years in the life of an elderly Jewish widow named Daisy Werthan, and her Black chauffeur, Hoke Colburn. He's hired by her son, Boolie, when she can no longer drive herself. At first, Ms. Daisy objects to the changes in her life. But eventually, the two transcend their differences to become lifelong friends. The play was based on real people: Uhry's grandmother and her retainer.

It was revived on Broadway in 2010 with James Earl Jones as Hoke and Vanessa Redgrave as Miss Daisy. When the production transferred to Australia, Angela Lansbury took on the role of Miss Daisy and it was later filmed for PBS' headline arts program Great Performances.