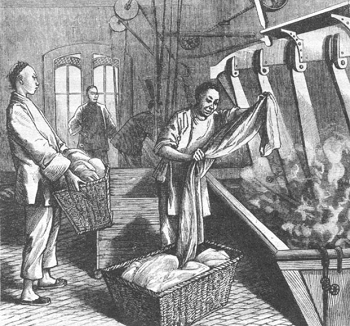 Two Wongs will make it white.
"The Chinese laundryman does not learn his trade in China; there are no laundries in China. The women there do the washing in tubs and have no washboards or flat irons. All the Chinese laundrymen here were taught in the first place by American women just as I was taught....The reason why so many Chinese go into the laundry business in this country is because it requires little capital and is one of the few opportunities that are open."
— Lee Chew, Chinese American businessman, 1903
Advertisement:

Prior to the invention and mass production of modern laundry machines, doing laundry was a lengthy, hot, dirty and tiring chore. Naturally, many people turned to professional launderers to get the job done. In The Wild West, many of these launderers were Chinese in origin. Since they were barred by law or custom from most other occupations, and they were willing to do hard work for low pay, this was seen as a good opportunity by the immigrants. Indeed, at one point, Chinese immigrants operated 89% of the laundries in San Francisco, and had a strong presence in other cities and towns.

Laundry was also seen as "women's work" and thus Chinese men were viewed as less threatening to white American masculinity if they took up this line of work. However, the association of Chinese men and laundry contributed to the emasculation of East Asian men. Even though the vast majority of Chinese-Americans today do not work in laundries — a stereotype of East Asians being more "feminine" than other races remains. Black people have to deal with the opposite problem where white people viewed them as being more "masculine" than other races.

Perhaps the most famous real-life Chinese launderer is Yick Wo, of the U.S. Supreme Court case Yick Wo vs. Hopkins,

which held that a law that on its face was racially neutral, but was applied in a racially discriminatory fashion, violated the Fourteenth Amendment of the U.S. Constitution, which the court maintained applied to resident aliens as well as full citizens. It's an important precedent.

By the 1930s, New York City had around 3550 Chinese-run laundries, proudly displaying "Hand Laundry" signs to show their commitment to traditional methods. Unfortunately, in an effort to drive the "dangerous foreigners" out of the city, laws were passed in 1933 to among other things restrict ownership of laundries to American citizens. (The laws of the time prevented Chinese immigrants from becoming naturalized citizens, though many laundries remained in Chinese American hands as another precedent, United States v. Wong Kim Ark,

established that people of Chinese descent born in the US are natural-born citizens of the US.) After negotiations by the traditional Chinese social organizations failed, the openly leftist Chinese Hand Laundry Association was formed to fight this discrimination. They did a very good job of it, and of supporting the Guomindang's defense of China against Imperial Japan with invaluable medical personnel and aid to reduce the appallingly high number of troop-deaths from wounds and disease. Unfortunately, despite ongoing support for the Guomindang, once the Communists destroyed the Guomindang in the Chinese Civil War in 1950 the Red Scare somewhat inexplicably saw the CHLA denounced as a "Communist" organisation and its membership sharply declined.

This trope also exists in the United Kingdom, and is often associated with the London district of Limehouse, which was home to many Chinese immigrants in the late nineteenth and early twentieth century (there is little sign of this today, with London's Chinatown having moved elsewhere).

Subsequent technological and social developments have pretty much killed off the Chinese launderer as a current stereotype. If they appear in any form nowadays, they're likely to be laundromat owners or dry cleaners (overlapping with Asian Store-Owner), and they're often Korean rather than Chinese.

In most fiction, the Chinese launderer is a Funny Foreigner, spouting pidgin English (occasionally including the stock phrase "no tickee, no shirtee") and clashing with customers over the amount of starch in shirts. They sometimes have bit parts in mysteries set in the appropriate time period, due to the use of laundry marks to identify where a piece of clothing has been.

open/close all folders
Advertising
At the end of the ad, she blows his cover: