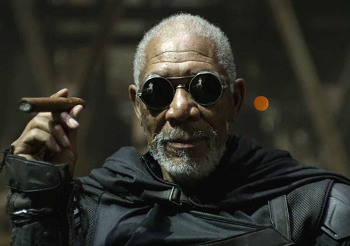 The effectiveness of a cast member is often determined by his distance from the median age of the cast. Deviations up or down will always be coupled with a lack of effectiveness. The Cool Old Guy is an exception to this. At some point, if one character is much older he swings the meter back to 'totally awesome'. In a lot of anime and video games, this makes him somewhere around middle age and the only non-clean shaven guy. Expect him to be greying, a loud voice, but in peak physical condition and unafraid of anything.