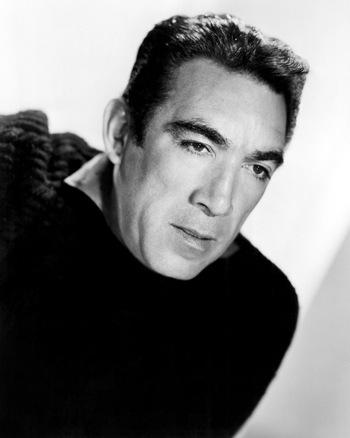 "I have lived in a flurry of images, but I will go out in a freeze frame."
Advertisement:

Manuel Antonio Rodolfo Quinn Oaxaca (April 21, 1915 – June 3, 2001), more commonly known as Anthony Quinn, was a Mexican-American actor of Mexican and Irish descent who appeared in more than 200 films over a 65-year career.

In 1936, he made the leap into the acting profession. That year he had a role in the play Clean Beds with Mae West and made his screen debut in the crime drama Parole!. This quickly opened the door to other film roles, which often typecast him as a bad guy.

Some of Quinn's finest film work came in the 1950s and '60s. He played Eufemio Zapata, the brother of Mexican Revolution leader Emiliano Zapata, in Viva Zapata! (1952), a performance which earned him the Academy Award for Best Actor in a Supporting Role, making him the first Mexican American to win any Academy Award. He received the same honor again in 1956, for his portrayal of the painter Paul Gauguin in Lust for Life with Kirk Douglas. He was also nominated for Best Actor in 1957 for Wild Is the Wind and in 1964 for Zorba the Greek, and played Quasimodo in the 1956 version of The Hunchback of Notre Dame. Quinn achieved box-office success with starring roles in The Guns of Navarone (1961) and Lawrence of Arabia (1962).

In his later years, he took on fewer acting roles and pursued his interest in art by painting, sculpting, and designing jewelry. Married three times, Quinn is said to have fathered 13 children. He died of respiratory failure on June 3, 2001, in Boston, Massachusetts.