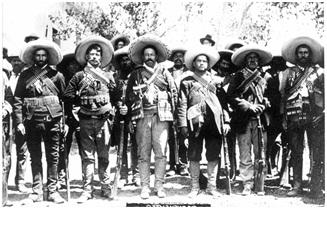 Pancho Villa with the staff of his División del Norte.
"Madero has unleashed a tiger. Now let's see if he can tame it."
—Porfirio Díaz, before going into exile
Advertisement:

The Mexican Revolution was a conflict that raged (obviously) over Mexico starting in 1910 and ending...well...anywhere from 1920 (with the military triumph and Álvaro Obregón) to 1940 (with the succession of Lázaro Cárdenas and the realization of many of the social promises of the revolution). It's considered the bloodiest conflict ever fought on Mexican soil (or, if you take the number of displaced, exiled, and disappeared people into the equation, the bloodiest fought on North American soilnote The other contender for the dubious title is The American Civil War (which had more confirmed deaths but depending on how one counts may have had fewer overall casualties), in case you were wondering) with over one million casualties. It's also notable as the first social revolution of the 20th century, beating the October Revolution by seven years. All of this war can be summed up in the following phases:

The causes of the war can be summed up as the people being angry with how the aging president Porfirio Díaz was managing the country. In his early years as President, he was considered a very capable one, handling the economy and industrialization of the country in such a way that Mexico managed to make up for all those years of civil strife in a decade, but at the expense of screwing the lower social classes and making it very hard for the middle class to go up in the social pyramid, creating a huge wealth gap between higher and lower classes. And then, at the second half of his presidential years, everything started to change for the worse, as the political scene started to stagnate and foreign industrialists in Mexico were given a lot of privileges. To sum it up, he violently put down several revolts of Yaqui and Mayo Indians in Sonora, and deported the survivors to plantations at Yucatán, where they were worked to death. Peasants were indebted to their landowners, and had all basic human rights stripped from them. There was no freedom of speech (though the clandestine press was quite big) though to make up for it, Díaz organized several "Democratic clubs" where people could rant about how much he sucked, under strict vigilance. And also, many foreign companies and landowners were allowed to run their lands like feudal kingdoms, able to screw their employees in every way they wanted — sometimes literally. And also, he was always committing electoral fraud in every election (though his perennial challenger, Nicolás Zúñiga y Miranda, was a bit odd, and never made much of an impact on the rest of the country).

When finally, in 1908, Porfirio Díaz announced to the American reporter James Creelman that he was going to hold free elections in 1910, the people rejoiced. Francisco Ignacio Madero González, an upper class politician from Coahuila, decided to run for presidency to avenge his brother, who was killed during a democratic revolt in Monterrey, Nuevo León. He founded the Partido Antirreeleccionista (Anti-Reelectionist Party) after selling a lot of his possessions. He was regarded as a messiah of democracy by the people, who had grown tired of the constant political strong-arming by Díaz and his cronies. There were also some other Díaz's cronies who wanted to get in the presidential chair, but they weren't as popular as Madero himself.

When the elections rolled around, Díaz again committed electoral fraud, blatantly rigging the elections. And to make matters worse, he threw Madero into jail, where he started to hatch a plan to reclaim power.

On November 20th, 1910, Francisco I. Madero called all Mexicans to arms against Díaz's illegal government. This was taken to heart by many factions who were against Díaz's increasingly erratic government policies. The whole conflict against Díaz ended quickly, as no one really wanted him there. At the end, Díaz exiled himself to France (ironically, the country he fought against with such fervor 50 years before), though not before making that quote at the top of the page.

People rejoiced when Madero became president, as his youthful image and his charisma managed to bring a lot of the former people who worked for Díaz under his administration. However, due to his ideas being quite mistaken towards the ills of the time in the country, his presidency sucked. The whole mess wasn't helped due to the fact that these people who worked under Díaz were disliked by many of his fellow revolutionaries, who felt he wasn't putting in the effort to help the country.

Eventually, this made a group of conservative generals plot against him under the auspices of then-Ambassador from the US, Henry Lane Wilson. The original plan was to have Victoriano Huerta, who changed sides to his convenience, and Félix Díaz (former President Porfirio Díaz's nephew) stage a coup against Madero, then Huerta holding elections and getting Díaz to win.

This is the moment when the shit hits the fan in Madero's presidency.

On February 9, several Army detachments revolted in Mexico City, all of them trying to oust Madero from power. However, during the coup, a loyalist Army officer saw many soldiers bringing machine guns into the city, and raised the alarm at the National Palace. Then, all hell broke loose in Mexico City, as every side was paranoid and shot at everything that moved. Mexico City dissolved into anarchy as Victoriano Huerta played off both sides to his own gains, even allowing the rebels to resupply themselves.

At the end, in February 19 at Midnight, Madero and the staff remaining loyal to him were caught after an ill-conceived plan to flee, and most of them got jailed or executed unceremoniously, with Madero's brother suffering a particularly gruesome fate in being tortured to death rather than shot. This resulted in the beginning of the government of Victoriano Huerta, thanks to Pedro Lascuráin, a foreign minister that was jammed into the presidency, only to appoint Huerta as Vice President and resign. He was president for 45 minutes (the shortest presidency in history). After that, Huerta eventually said "screw this" and did not hold new elections, so he got to stay in power.

Huerta soon became even more hated than Díaz in how he ran things. While Díaz was undoubtedly authoritarian, he greatly enjoyed using diplomacy, largely relied on civilian technocrats and a few military officers to run his government, made concessions, and had a very affable personality despite his repressive policies. Huerta hated cabinet meetings, treated all his civilian ministers like crap, regularly disdained any idea of elected government in favor of la mano nera (the iron hand), attempted to turn Mexico into a fully militarized state, and was a rude short-tempered alcoholic. With only military officers placed in government positions, political opposition from both sides regularly murdered by the army and police in public - the signature excuse being "they were shot while trying to escape" - and all government funding solely directed towards expanding the army, resentment towards Huerta grew more fierce each day. The liberals hated Huerta for trampling on the constitution every day and his open contempt for civil liberties, the conservatives (including Felix) hated Huerta because he'd banned the elections and solely wanted power for himself. Even the Zapatistas admitted that the paternalistic Díaz could be clever and had the good sense to leave Mexico when his time was up, while Huerta was simply a stupid thug trying to terrorize everyone into submission.

The rest of the revolutionary leaders were pissed off by the fact that a democratically elected president was killed by a coward and a leader so vicious he made Díaz look preferable, so the battles started against Huerta as everyone turned on him. From one side there was Doroteo Arango A.K.A. Francisco "Pancho" Villa in the north, Emiliano Zapata in the south, Álvaro Obregón in the east and Venustiano Carranza in the northwest. Eventually, Huerta exiled himself in July 1914 when he realized that he was facing an unwinnable scenario and his allies (like former revolutionary Pascual Orozco in the north, who revolted against Madero) were executed, exiled or imprisoned. After sending Huerta into exile the revolutionary leaders held a convention in the city of Aguascalientes to settle things. However, there was great tension between Villa and Carranza (the latter even made a "legal" government in Mexico City and called himself supreme commander). Since the convention only managed to appoint a president and not make a common plan that pleased all sides, the revolutionary leaders started battling against each other on 2 sides: Villa-Zapata (on the "Conventionalist" side, who were fond of educating the people and returning the land to its owners) and Obregón-Carranza (on the "Constitutionalist" side, who were more conservative). Then, while things seemed to be going fine, Pancho Villa had a falling out with his fellow revolutionaries and their U.S. suppliers, and in an act of desperation, he took up arms against all of them. This didn’t work out in his favor. Villa’s attack on Columbus, New Mexico in 1916 cost him between 90 and 170 men killed to just 16 American soldiers and civilians (including a pregnant woman, which didn’t exactly help Villa’s public image), in exchange for a few crates of rifles. It also provoked Pershing’s Punitive Expedition, which failed to capture or kill Villa, but still mauled his remaining forces and left him in the position of being essentially at Carranza’s mercy. On a side note, Ambrose Bierce vanished in Mexico sometime around 1914 after coming to observe the conflict, his ultimate fate a mystery.

The whole war more or less died down after 1917, when a new constitution was drafted in the provisional congress led by Venustiano Carranza, since most factions agreed that their demands had been satisfied. However, a few people were not too happy about being excluded from the whole deal, namely Emiliano Zapata and Pancho Villa.

Those two eventually started to stage new campaigns against the government, and Félix Díaz joined the fray once again. All of these campaigns failed, with Villa eventually retiring in 1920, only to get assassinated Gangland-style while on his way to a wedding, Zapata murdered during a False Flag Operation by the Mexican Government, and Félix Díaz being more of a nuisance until he went back into exile in 1920.

The aftershocks of the revolution were quite strong back in the first half of the 20th century. Depending on who you ask, the conflict ended after the drafting of the Constitution of 1917, in 1924 when Plutarco Elías Calles entered power, a few years later when the Cristero war ended, or until 1936, when then-president Lázaro Cárdenas repossessed all of the foreign oil companies to fund PEMEX, the state petrol company.

The Mexican Revolution in the media: