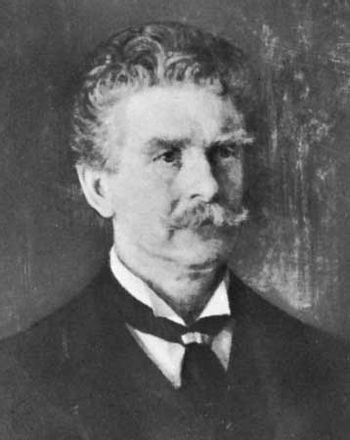 "Humour is tolerant, tender; its ridicule caresses. Wit stabs, begs pardon — and turns the weapon in the wound."
— Taken from one of Bierce's late essays.
Advertisement:

Ambrose Gwinnett Bierce (June 24, 1842 – circa 1914) was an American editorialist, journalist, short story writer, fabulist, and satirist, and one of American literature's most intriguing, and most overlooked, luminaries... and a man who scared Lovecraft.

Ambrose Bierce (later nicknamed "Bitter Bierce" and the "Old Gringo") was a journalist and editorialist from Meigs County, Ohio, whose deeply cynical opinions on the world and the people living in it led him to create his now-famous series of short stories and other fiction pieces, most notably An Occurrence at Owl Creek Bridgenote Adapted as a French short movie, which was then aired as an episode of The Twilight Zone (1959). Bitter Bierce never gave anyone a reason to wonder about his nickname: he was aggressive and fond of war (though also an anti-imperialist), fascinated by death, very cynical about love and religion, and perplexed by women. His works are notable for their dark, troubled, and haunting tone and subject matter. He would have made a fine bedfellow for Poe and Lovecraft, but sadly, and certainly not for lack of talent on his part, he never achieved their notoriety.

Later in his life, when the Mexican Revolution was raging down south, Ambrose Bierce decided to leave the United States and contribute to the war effort in Mexico, hoping to meet up with and fight alongside Pancho Villa. After a couple of months (during which time he did indeed meet up with Pancho Villa), his letters to his friends in the States abruptly ceased. He was never heard from again. He may have had something of a death wish; see the Quotes page. The book (and The Film of the Book) Old Gringo speculates on what might have happened to him after his famous disappearance, but no one knows what happened for sure; he openly boasted to one friend that "No one will ever find my bones," and thus far has been proven correct.

Lovecraft enthusiasts should be familiar with An Inhabitant of Carcosa, his contribution to the Cthulhu Mythos.

Works by Ambrose Bierce with their own trope pages include:

Other works by Ambrose Bierce provide examples of: