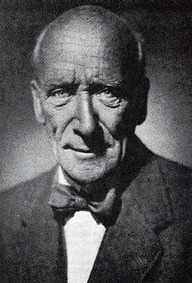 Algernon Henry Blackwood CBE (14 March 1869 — 10 December 1951) was a very prolific (for his time) writer of Horror and Fantasy short stories and novels as well as an early writer of the cosmic horror story as well as a journalist and broadcasting narrator. His works combine the beauty of nature (often going into scenery porn) with various gothic horror tropes as well as creatures and folklore from various religions such as the wendigo. His most famous work is probably "The Willows" which many consider his best. He also was an early influence on the occult detective genre of fiction with his creation "Dr. John Silence". His work would occasionally play with a trope and feature black comedy. In contrast to many other authors like him Blackwood had a genuine interest in the supernatural and actually worked as a paranormal investigator with a group of friends before he moved into writing.