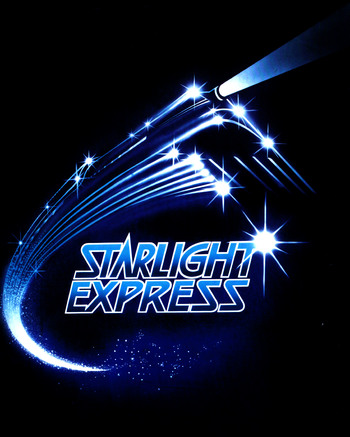 After the success of Cats in 1981, Andrew Lloyd Webber began looking into writing a musical based on the Thomas & Friends stories, with his kids in mind, but couldn't get the amount of creative control he wanted from the Rev. W. Awdry. Instead, he pulled up a few older ideas he'd had proposed to him in the 1970s — among them, a musical version of The Little Engine That Could and a new version of "Cinderella" — and initially tried to combine them into the story of a little steam engine who's bullied by her electric and diesel stepsisters, but ends up being chosen as the royal train by the Prince after winning a race and losing a piston in the process, which the Prince uses to track her down. This idea, with many many changes made, ended up evolving into Starlight Express, whose first version premiered in London in 1984.

The protagonist of the story is Rusty, a hard-working young steam engine and Butt-Monkey of the rail yard in which he works, who's constantly mocked by the Jerk Jock diesel engine Greaseball. Rusty has a big crush on Pearl, the pretty observation car, but Pearl has impossibly high standards for the engine of her dreams, and Rusty doesn't cut it as far as she's concerned.

To the general public, this show is mostly famous for being performed entirely on roller skates, giving the anthropomorphic train characters the ability to move as smoothly as a real train would. Within its own fandom, however, it's known for a startling amount of broken and dark themes in what's supposedly a musical for all the family. It is also by far the longest running musical in Germany, having achieved over 16 million admissions in Bochum since 1988 in a venue purpose built to house this musical.

Not to be confused with The Starlight Express

theatrical adaption of Algernon Blackwood's novel A Prisoner In Fairyland, written by Violet Pearn with music by Edward Elgar.