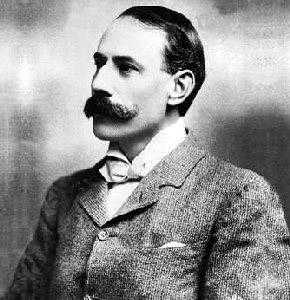 "My idea is that there is music in the air, music all around us, the world is full of it and you simply take as much as you require."
— Edward Elgar, as quoted in R J Buckley's Sir Edward Elgar.
Advertisement:

Sir Edward Elgar (2 June 1857 — 23 February 1934) was a British composer, born near Worcester in 1857. He is known for a number of pieces, including the Enigma Variations, the Pomp and Circumstance marches (five), and Cello Concerto in E minor. His musical style, unlike his contemporaries on the British music scene, was not influenced by folk music, but more on Continental influences, including George Frederic Handel, and French composers, including Hector Berlioz, Camille Saint Saens, and Leo Delibes, the last of whom proved to be a major influence on his music.

He was born in Lower Broadheath, Worcester, in 1857, to a music-loving mother and a professional organist and piano tuner father who keenly encouraged his enthusiasm for music. However, aside from a few piano lessons in his formative years, he was primarily self-taught, borrowing music books from the local library and reading every book on the theory of music he could find. He tried to learn German so he could attend the world-famous Leipzig Conservatory, but his family could not afford it. He later credited this with saving him from the dogmatism of the school. He credited Hubert Parry's work in Grove Dictionary of Music and Musicians as being the strongest and most valuable influence on him. He later supported himself giving piano lessons in his father's shop.

Elgar's big break came with the Enigma Variations (a good name for a spy novel), conducted at its premier by the famous German conductor Hans Richter (incidentally, a good name for the villain of said spy novel, or perhaps the anti-hero). Enigma was hugely well received, finally giving Elgar's music the critical clout and cultural relevance it richly deserved. Likely due to Elgar's penchant for emulating and refining central European styles of music, it was also warmly appreciated in Europe, and remains highly popular today. His next big piece was the famous Pomp and Circumstance March No. 1, which remains a favourite with the British viewing public during the BBC Proms (not "prom" in the American high school function sense, but an eight week series of concerts at the Royal Albert Hall put on by the BBC). His major works included two symphonies, concertos for violin and cello, and three large-scale religious oratorios, though he never wrote an opera. In 1911, King George V awarded him with an Order of Merit. After World War I, his music fell out of fashion, and he was devastated by the loss of his dear wife, Alice, to lung cancer in 1920. After her death, his motivation slipped completely and he mostly stopped composing; he also indulged a great number of bizarre enthusiasms, such as building a laboratory in his garden, and journeying up the Amazon because he could.

He continued to conduct his own music, including a pioneering series of recordings, and is often said to be the first major composer to take recordings seriously; British Pathe recorded him conducting a rehearsal of Pomp and Circumstance in 1931, which contains the only audio recording of him, instructing the orchestra to "play this tune as though you've never heard it before." In 1933 he accepted a commission to write a third symphony, but it was incomplete when he died of colorectal cancer in 1934. He is buried next to his wife at St Wulstan's Church, Little Malvern.

He didn't write much church music, aside from some organ pieces, because he was Roman Catholic, and there was little demand for Catholic church music in England. Most of his sacred choral music is from the later part of his career when he was so famous that his Catholicism was not held against him.

After his death, his work mostly disappeared from view. However, in recent years he has been increasing in popularity internationally, yet still remains most popular in Britain. The middle section of his Pomp and Circumstance March No. 1, with lyrics by A.C. Benson, has become a well-known British patriotic song under the title "Land of Hope and Glory", which is today used as the anthem of the Conservative Party, and sometimes as the unofficial national anthem of England at sporting events where the UK nations compete separately. It is sometimes played at graduation ceremonies in the US as well.

As something of a side note, he was an avid cryptography buff and left behind a cipher

which remains unbroken to this day.

He is mentioned as being dead in the song "Decomposing Composers" by Michael Palin sang on Monty Python's Monty Python's Contractual Obligation Album. He also ended at #60 in 100 Greatest Britons. From 1999 to 2010 he was chosen as the historical figure to appear on £20 English banknotes.