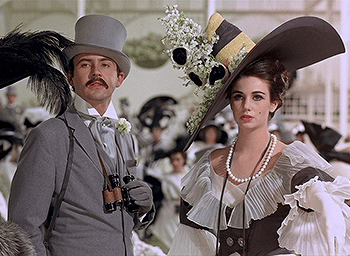 "It's grand to be an Englishman in 1910
King Edward's on the throne, it's the age of men!"
— George Banks, "The Life I Lead", Mary Poppins
Advertisement:

The long, hot Indian summer between the death of Queen Victoria and the start of World War I. A time of elegant tea parties, Gentleman Snarkers, Art Nouveau, ridiculous Flying Machines and (mostly) unsinkable ships.

Strictly speaking, the term only applies to the British Empire during the reign of King Edward VII from 1901 to 1910, but it is usually extended up to the outbreak of World War I in 1914 to better capture the end of the era, overlapping with the Progressive Era in The United Statesnote From the assassination of William McKinley and inauguration of Theodore Roosevelt in 1901 to entry in World War I in 1917. Similar periods in other countries, like "La Belle Époque" in Francenote Roughly from the establishment of the Third Republic to World War I, and the Wilhelmine Era in Germany note From the dismissal of Otto von Bismarck in 1890 to the start of World War I. Noticing a pattern?, also often incorporate The Gay '90s.

The early 1900s were a great age of technological transformation, and numerous scientific discoveries were made during the period. This was the period when the first Nobel Prizes were handed out, when Albert Einstein drew a line between traditional and modern physics with his Annus Mirabilis papers, when the Wright Brothers invented the airplane, when the radio was created and popularized, when cars like the Model T first became commonplace, and when the first expeditions to the North and South Poles were made. The 1900 Exposition Universelle in Paris and 1904 St. Louis World's Fair remain some of the more famous world's fairs due to their showcasing of this great change.

In Britain, the Boer War brought a rather unpleasant end to the Victorian period and foreshadowed the brutality of conflicts to come, but Britons at home remained unfazed as the United Kingdom remained at the top of the world both politically and economically. France enjoyed a cultural renaissance as the country bounced back from the Franco-Prussian War and Napoleon III's dictatorship, returning to the spotlight as the cultural capital of Europe. The United States cut down on the corruption that had plagued it during The Gilded Age thanks to the reforms of Theodore Roosevelt's administration, while the Wild West became a little less wild.

Not all was well in the world, of course. In many parts of Europe, class struggle and ethnic tensions started to boil over. The Ottoman Empire was in a period of collapse as the Balkans became a hotbed of nationalism, which would go on to spark something a little bigger, while poverty among the Russian peasantry began to approach the breaking point as an insurrection was attempted in 1905—the little brother of the 1917 revolution. This was also a period of extended colonialism; Europeans, most infamously the United Kingdom and Belgium—but also including France, Germany, Italy, Spain, and Portugal—solidified their rule over Africa during this period after its establishment in the late 19th century. The Raj was at its greatest extent in this era, and the Spanish-American War and the building of the Panama Canal were closely tied to American imperialism in the Western Hemisphere and in the Pacific, which, along with the Caribbean, the United States promptly converted into an "American lake" in short order, flexing its ascendant naval powers and ruthlessly crushing, dominating or colonising weaker nations, including internationally-unrecognised protostates like the Philippinesnote which had literally just broken free from over 3 centuries of Spanish rule at this point; so much for self-determination. Meanwhile, the Empire of Japan got into the imperial game at around the same time the United States did, going to war with and defeating Russia in 1905—the first time an Asian power defeated a (politically) Western/European one—and was in the early stages of expanding control over East Asia; by this time, Taiwan and the Korean peninsula were now both under Japanese rule.

Weirdly, unlike The Victorian Era, no media set during this period features the person named after this era, King Edward VII, not even mentioning him. It could be due to how short Edward's reign was. Ironically a lot of media set during The Victorian Era will have Victoria despite making few public appearances, while Edward would make a lot of public appearances, with few media featuring him. And even then, the term "Edwardian" extends to the 1910s, despite his son, George V, having succeeded him.

In spite of its many problems and darker sides, the period still remains fondly remembered. It was especially popular as the subject of movie musicals in The Golden Age of Hollywood and still retains some cultural relevance today; it's the time when women's suffrage came in full swing, it's the time when one of America's most beloved presidents was in office and when one of Britain's current primary political parties first took hold, is a greatly influential era to anyone interested in the history of science and technology, and it's also the period when many sports took the shape of their current forms, including when modern sporting wear developed and when the modern safety bicycle was popularized. The comic strip as we now know it (see the folder below) essentially got its start during this era.

See also The Silent Age of Hollywood, the Meiji Restoration, Imperial Germany, The Mexican Revolution, The Raj, Romanovs and Revolutions, and No More Emperors for more specific information on the period in different places. The Gay '90s and The Roaring '20s are the decades before and after the Edwardian period.

Tropes featured in this period are:

Works made, but not set, during the Edwardian era