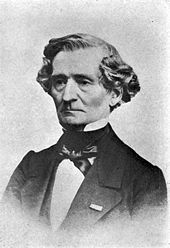 "Time is a great teacher, but unfortunately it kills all its students."
Advertisement:

Louis-Hector Berlioz (11 December 1803 — 8 March 1869) was a French composer, conductor and music critic of the Romantic Era. An extremely controversial figure due to the direction in which he took his compositions, Berlioz had difficulty having his works performed in France, the story of which is told colourfully (though with exaggerations) in his Memoirs. He fared somewhat better abroad as his tours in Germany, Russia and England were relatively successful. Schumann was enthusiastic about his music, and Liszt was one of his champions.

A Shakespeare fanboy, Berlioz wrote a "dramatic symphony" based on Romeo and Juliet and a full opera based on Much Ado About Nothing (under the title Beatrice And Benedict). His best-known work is Symphonie Fantastique, an early example of programme music, and one of the first examples of a psychedelic symphony. (In fact, the programme to that work mentions a "sensitive artist" who "poisons himself with opium in a fit of despair."), as well as the Te Deum, specifically its second movement, "Tibi omnes", which was used as the backdrop to the lighting of the Flame for the 2000 Olympic Games in Sydney, Australia.