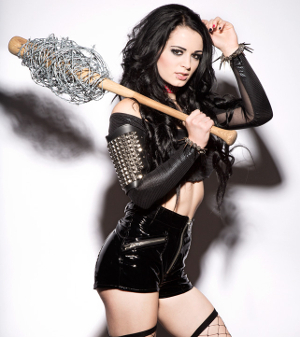 Tear the stars out from the sky!
Saraya-Jade Bevis (born 17 August 1992) is an English former professional wrestler known previously as Britani Knight. She made her first debut for the World Association Of Wrestling Academy at age 13, when she was asked to fill in for another wrestler who could not make a show. She has since competed for various European promotions and was invited to work for SHIMMER in 2011. She signed to WWE later that year, where she performs on the main roster and in its developmental territory, NXT, under the ring name Paige.
Advertisement:

She is a two-time Divas Champion, and has been a cast member of the show Total Divas since its third season. In 2017 Dwayne Johnson announced he would be producing a biopic based on her life, with Florence Pugh portraying her.

As of April 10th, 2018, she has officially retired from wrestling due to an injury sustained in 2017, but has been appointed as the General Manager of SmackDown Live! after Daniel Bryan had resigned from his position to compete full-time.

She then continued with:
It's not like I hate you
I like you a bunch!
But you just have that face
That I wanna punch

I'll see you this Sunday!
But this part is vital
I'll be skipping my way out of SummerSlam
With my Divas Title