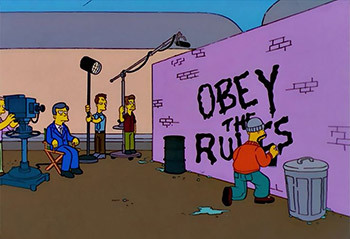 These urban renewal murals are going too far.
"We're wild, reckless men, we're on a rampage again
We drive with just one hand on the wheel
Danger's in our soul, we're going out of control
Swimming right after a big heavy meal"
— "Weird Al" Yankovic, "Young, Dumb & Ugly"
Advertisement:

Someone who is going for being a Rebellious Spirit but whose rebellion is mildly inconvenient at best, or so minor to be unnoticed at worst. This may be a fumble on the writer's part where they genuinely think the act is impressively rebellious but due to Values Dissonance the audience doesn't think so. However, usually it's used as a characterization trope to show that the character himself is either so out-of-touch or self-important that they believe they're edgy and pushing the envelope even when it's unimpressive. They may also be too timid to really commit to a truly rebellious act. Maybe they don't even really believe in their cause, but just want to fit in with "cool" modern culture.

Overlaps heavily with Small Name, Big Ego. Compare Poke the Poodle, where someone's attempt at doing evil is similarly unimpressive. Also compare The Man Is Sticking It to the Man, where a company encourages rebellion by following their own rules and buying their products. Someone who is portrayed as a real rebel but never actually crosses this line is a Bad Butt. If they pretend to be a political radical but never actually do anything worthwhile, that's Revolutionaries Who Don't Do Anything.

Contrast with an Internal Reformist, who never poses as a rebel outwardly yet invests efforts to change the status quo. Also contrast with Zeroth Law Rebellion, which occurs when a character violates the spirit of the rules but stays in technical compliance with them. Not to be confused with Bothering by the Book, where someone deliberately evokes this to fight back by following the rules to the letter in a way that prevents them from being punished but causes no end of problems for those around them.