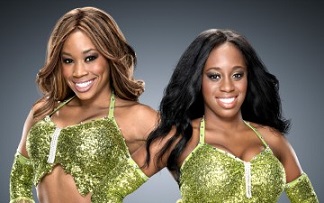 The Funkadactyls was a female professional wrestling tag team exclusive to WWE consisting of Naomi and Cameron. The team was an offshoot of their previous stable Tons of Funk - made up of Brodus Clay and Tensai - that went solo when Tons of Funk disbanded in late 2013. The girls initially debuted as dancing valets for Brodus in late 2011, but roughly a year later transitioned to a wrestling role and were integrated into the WWE Divas' division. The team of the Funkadactyls was dissolved in mid-2014 as the result of mounting tension between Naomi and Cameron due to the latter's Face–Heel Turn.