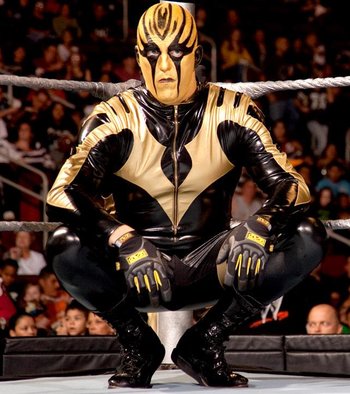 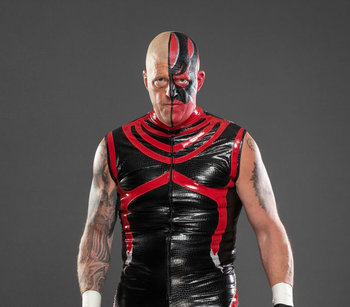 as "The Natural"
Advertisement:

Dustin Patrick Runnels (born April 11, 1969) is an American Professional Wrestler best known by his ring names Dustin Rhodes and Goldust. He is the son of WWE Hall of Famer "The American Dream" Dusty Rhodes, the half-brother of former WWE superstar and All Elite Wrestling cofounder Cody Rhodes and the ex-husband of former WWE Diva Terri "Marlena" Runnels. While he is most known for his work in WWE and WCW, he has also competed for All Japan Pro Wrestling, the United States Wrestling Association in Memphis, TNA, Fighting Opera HUSTLE, and many independent promotions around the U.S.

Dustin got his start bouncing between WCW and the independent scene, chasing tag team gold here and there as himself, taking on the moniker "The Natural" most places he went, even being the US champion at one point. However, his star-making gimmick came when he returned to the WWF in 1995 as the mysterious, gold painted figure known only as Goldust; known for his mysterious, sensual mannerisms and penchant for mind games, and above all else: a lust for all things gold. The character went through all sorts of bizarre twists and turns over the years, including crossdressing, stuttering problems, and implied depravity the likes of which were unseen in wrestling at the time. Eventually the heat for the character died down, and he returned to being Dustin for a little while.

Eventually he returned to WCW under the name Seven in 1999, a gimmick inspired by the movie Dark City, but was quickly dropped by Turner after major concerns about the vignettes produced for him gave the impression he was a child abductor. He dropped the gimmick in "spectacular" fashion by burying it himself on live television (although in 2020 he confessed that he'd created it himself and loved it, but Vince Russo pulled the plug on it). He returned to the WWF in 2002, and in 2003 struck up an odd partnership with fellow WCW veteran Booker T, and their antics made them surprise fan favorites, but it was not to last.

Since that point, his career has largely been him bouncing between the indies, TNA (usually as himself or in 2007 as Black Reign, a gimmick he has since disavowed), or the WWE, usually returning as Goldust. Since that point, he has largely been a midcard or comedy act; teaming with the likes of many Divas, R-Truth, his brother, and many more. He finally left the 'E for what looks like good in early 2019 to shack up with his little brother Cody in AEW.

Among his in-ring achievements, he is a former WCW World 6-Man Tag Team Champion

"You will never forget the tropes of *inhaled deeply* Goldust":