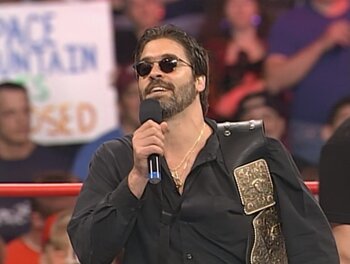 Pictured: A one-time WCW World Heavyweight Champion.
"Do you know how many copies of the book The Death of WCW I've autographed [...] and when the people come up to me with the book, they're scared to death! And I'm like, 'are you kidding me, gimme the book, I'll sign it!'"
—Vince Russo, being a good sport (2006).
Advertisement:

Vincent James Russo (born January 24, 1961) is a professional wrestling booker and writer who was a former head writer for WWE, WCW, and TNA.

Russo's biggest success came during the Monday Night Wars in WWE (then the WWF) with the Attitude Era branding, resulting in the WWF's biggest period of success since Hulk Hogan and a resurgence in popularity for pro wrestling in the U.S. He has been credited with popular feuds in the WWF such as "Stone Cold" Steve Austin vs. Mr. McMahon, The Undertaker vs. Kane, The Rock vs. Mick Foley; having a hand in the rise of D-Generation X, and he was the one who came up with the Brood. When Russo and Jim Cornette were booking Raw, it pulled some of its highest ratings.

Russo would depart from the WWF to WCW in October 1999, but his booking in the promotion would become subject to controversy, to the point that he is blamed for WCW going under a few years later. The consensus after the fact seems to be that at worst he was just one of many factors on it but that nonetheless, without the editing and input he received in the WWF, the results of his booking in WCW were variable in quality. (Plus Nitro's audience had different expectations from Raw's audience.)

As a result of this, he is also one of the few non-wrestlers in the business who generates controversy: When it was announced that he had been re-hired by WWE in 2002, the writing staff threatened a walk-out. He is also the primary reason why TNA was dropped from Spike TV after it was revealed that TNA re-hired him in secret after a previous stint there, based purely on his reputation.

Nowadays, he hosts his own podcast, The Brand, where he shares his thoughts on modern wrestling. Vince has posted the highlights on his YouTube channel.