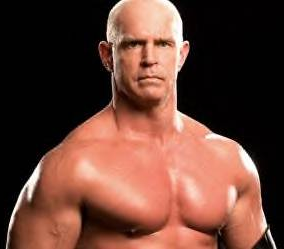 How do you like him now?
"If [Crash Holly defended the Hardcore Championship] 24/7, I'm gonna do it 48/14, and how I about I start with you? How about, I could start with you, right here, right now? It doesn't matter to me, Michael Cole, 'cause I will break your ass in half, you little shithead!"
— WrestleMania 2000 post-match interview
Advertisement:

Bob "Hardcore" Holly (born Robert William Howard on January 29, 1963) is an American professional wrestler, whose tenure with WWE lasted from 1991 to 2008. Initially, Holly portrayed happy-go-lucky NASCAR racer turned wrestler Thurman "Sparky" Plugg, which failed to garner much success. During the second half of the decade, Holly became a member of the tongue-in-cheek The J.O.B. Squad; the stable disbanded after Holly's win over Al Snow in one of the inaugural matches of the newly-created WWF Hardcore Championship, setting the tone for the hardcore wrestling division of WWF's Attitude Era.

Having thus earned his moniker of "Hardcore", Holly would capture the Hardcore Championship five more times, becoming one of the relatively few holders of that to boast respectable, lengthy title reigns. Holly would later form a minor stable together with (kayfabe) cousins Crash and Molly Holly. After the stable's dissolution, Holly would spend the remainder of his WWE career in and out of action with various injuries; notably, he was in a main event feud with then-WWE Champion Brock Lesnar, had a well-remembered Extreme Rules Match with Rob Van Dam in WWE's revived ECW, and won the WWE World Tag Team Championship with Cody Rhodes on the 15th anniversary episode of WWE Raw.