The Runner-Up Takes It All 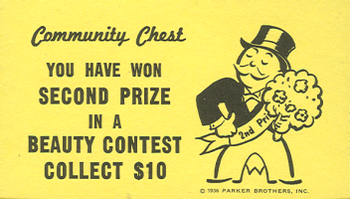 You've never even heard of the first place guy.
Advertisement:

When the person who comes second or worse in a Reality Show gets more out of it than the winner, be it in post-show popularity, sales, endorsement cash, or simply not looking like as much of a jackass on national television.

For the talent-based shows, the reason can be described easily. When you win, you're hot, and the producers of the show want to capitalize on that. This leads to getting pushed too fast and too hard. With singers, it might involve churning out a sub-par album to capitalize on their star power. Hype Backlash sets in, and people tend to get a little sick of them. But for the contestants who finish lower in the ranks, they still have all the recognition—all of the same people watched the show, after all—but they're allowed to work at their own pace with far more creative control, and develop a high-quality body of work that people are more likely to enjoy.

Also note that, almost by definition, many more people don't win than do (for every winner, there are multiple runners-up from the top Ten or Twelve contestants.) So even if any given winner is more likely to hit it big than any given runner-up, you still might see more runners-up who become stars than winners. Another reason is that the runner-ups simply decided that they weren't up to par in that field (they did lose, after all), but also discovered they had talent in a different field during their time on the show (acting is the most common such talents) and successfully pursued a career in that without attaining the trappings of the original competition's winner.

Also note that not all contests which are interesting for the public to watch are necessarily very good at discovering talent. They usually take place in highly isolated and contrived environments, which do not necessarily reflect the working environment of the industry the show is based on. They are also intended primarily as entertainment, meaning that the judges very likely take into account how a contestant appeals to the show's target audience. Often, the audience wants to see a quirky or avant-garde contestant win because they are passionate about the artistic pursuit in question. That tends to mean that they are jaded, and interested in innovation above all else. However, that person is unlikely to have much success in the industry because most industries are conservative by nature. They want to sell products, not win prizes. The runner-up who lost points for being "too conventional", is likely to do better when they get into the real world because they have a product the industry can actually sell to people who don't spend every waking moment thinking about that artistic pursuit.

This trope is also common in awards shows such as the Oscars or the Grammys, where the winners can vanish almost as soon as they win, and then be completely overshadowed by at least one of the competitors they beat in a given category (the "Best New Artist" field is quite notorious for this).

Compare Second Place Is for Winners, Award Snub. Contrast Dark Horse Victory, which is often a cause of this trope.