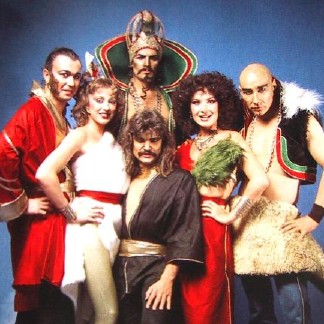 The great thing about their cover art is that you know exactly what you're getting.
Advertisement:

Formed within just few months in 1979, Dschinghis Khan was the product of the disco boom and following on the heels of other German-produced bands such as Boney M., Arabesque, and Silver Convention. Their songs were based on historical people and places. The group was formed by music producer Ralph Siegel AKA Mr. Eurovision. Siegel was apparently obsessed with making the next ABBA. Their name is the German spelling of "Genghis Khan," the name of the song they sang in their introductory performance in the Eurovision Song Contest. While they didn't win Eurovision, the group achieved great success in Europe, Russia, Israel, Australia, and Japan.

The group broke up in the mid-1980s. After the break-up, lead dancer Louis Hendrick Potgieter (known to Youtube users as Dancing Santa Jesus) returned to his native South Africa to manage a hotel. He contracted HIV and died of AIDS in 1993. For this reason he's been considered gay, though evidence (photos of him and his ex-fiancee, pop/jazz/disco singer Madeleine Davis, as well as comments from his sister) disprove that.

Wolfgang Heichel, the youngest member of Dschinghis Khan, introduced his wife Henriette Heichel to Siegel to help him completing the group cast. The two divorced in 1986, although both are taking part in modern incarnations of Dschinghis Khan.

Steve Bender, "the bald one" that looks like Destro, left the group in 1981 on the advice of his doctor and because of backpain, which made dancing hard for him; an unofficial version has it that he had some arguments with the producers. He returned for a reunion concert in 2005 (sans the baldness), but died six months later from cancer.

Leslie Mandoki, the drummer, fled to Germany from his native Hungary, as the Commies wouldn't let him keep his mane and sing whatever he wanted. He is now an established jazz/rock session drummer, and it's better not to mention his tenure in the Khan during interviews.

Edina Pop is Hungarian too. She still works with the group in reunion concerts.

In 2004 "Moskau" became a surprise hit on the Internet due to the sharing of a performance of the song from the group's glory days. Blogging viewers of the video commented that the wild disco dances, retro instrumentation, and happy German vocals are hilarious and oddly uplifting. The song and its video have become an internet fad. Today, Dschinghis Khan is in the middle of the Cirque du Dschinghis Khan Tour, which includes the group in its current incarnation: "The Legacy of Dschinghis Khan" and acts from other artists including Mongolian circus acts.

Their notable songs include:

Dschinghis Khan has examples of:

A list of things that they have songs about: