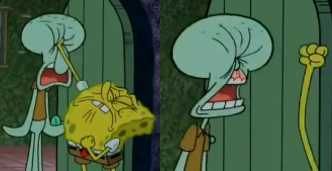 Was that you knockin'?
A character gets hit in their face but instead of a bloody gaping hole or a gruesomely disfigured face, they end up with a funny thing similar to when you crumple a blanket. Their facial features sink inwards and a few wrinkles appear in their place.
Advertisement:

As a subtrope of Amusing Injuries expect this to be played solely for laughs.

However, the cause of this doesn't always necessarily have to be physical violence. Sometimes a character can have their face sinking by itself as a reaction to some unpleasant sensation, mostly horrid smell or eating some really bad food.

Contrast Cranial Eruption, where injuries cause bumps instead of dents.