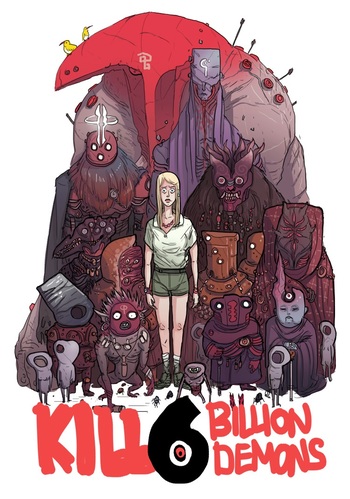 "Reach heaven through violence."
"The king of all creation fell out of heaven, usurped by a seven headed beast. But the old king shall choose a new, and he will ignite the third conquest. He will be flanked by a white and a black flame, his coming will be followed by 108 burning stars. He will bear the terrible heat of the voice in his brow, the mark of his lordliness. He will face the beast - and he will annihilate it. He will wield the terrible blade of want, and the pillars of heaven will quake with his coming. And his name - his name will be - Kill Six Billion Demons."
— Prophecy of the Successor
Advertisement:

is a 2013 New Weird fantasy webcomic written and illustrated by Tom Parkinson-Morgan, also known as Abbadon.

God is Dead. Far beyond Earth, The Multiverse is in chaos as criminals rule and callous kings maintain a fragile peace. One day, a mysterious and bloody figure appears to a barista named Allison Wanda Ruth, and bestows her with an Ancient Artifact known as the Key of Kings. In the process, Allison finds herself suddenly transported to the final resting place of the gods in the exact center of the multiverse, the red city of Throne. Allison must now travel through Throne and the 777,777 universes of creation to save her kidnapped boyfriend (even if he is a creep) and stop the plans of the stone angels, masked demons and mad god-kings that want her Key for themselves.

Books 1-4 have physical editions released by Image Comics. Now has a character sheet.

Abbadon also developed Broken Worlds, The Role-Playing Game based on the setting using the Powered by the Apocalypse system and released it via Patreon.

Yisun Atru Vyam. Forgive me for these tropes I am about to list: