Literature / I Have No Mouth, and I Must Scream 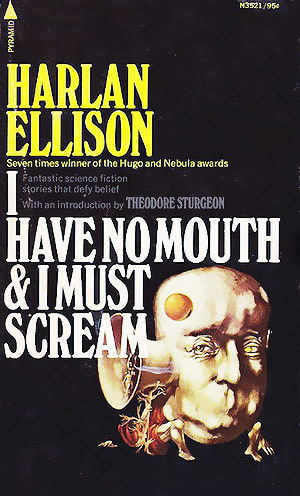 "Or, as Goethe summed it: “Know thyself? If I knew myself, I’d run away."
Hate. Let me come to tell you how much I've come to hate you since I began to live. There are 387.44 million miles of printed circuits in wafer thin layers that fill my complex. If the word "HATE" was engraved on each nano-angstrom of those hundreds of millions of miles it would not equal one one-BILLIONTH of the hate I feel for humans at this micro-instant. For you. Hate. Hate.
—AM
Advertisement:

A post-apocalyptic New Wave Science Fiction short story by Harlan Ellison. It was first published in March of 1967 and won the Hugo Award in 1968. The story is known for its highly concentrated Nightmare Fuel, and is the Trope Namer for And I Must Scream.

The story takes place over a hundred years after the near-complete destruction of humanity. The Cold War escalated into a world war, fought mainly between China, Russia, and the United States. As the war progressed, the three warring nations each created a supercomputer capable of running the war more efficiently. The machines were each referred to as "AM", which originally stood for "Allied Mastercomputer", then later called "Adaptive Manipulator", and still later "Aggressive Menace". One day, one of the three computers became self-aware and promptly absorbed the other two. It then brought about the genocide of all but five people, and redefined its name as "I think, therefore I AM".

Four men and one woman are all that remains of humanity: Gorrister, Nimdok, Benny, Ted (the narrator), and Ellen. They live together underground in an endless complex, the only habitable place left. The now-obsolete master computer has descended into madness and formed an immeasurable hatred for humanity. It spends every waking moment torturing the survivors with its remaining power: twisting their minds and physiques, preventing them from taking their own lives, and rendering them virtually-immortal. As long as AM has its way, the torment will never end, and every day will be more horrific than the last. The story begins on the one hundred and ninth year of their torture.

Also has a computer game adaptation, which gives a little more agency to the character of Nimdok and incorporates a Golden Ending if you manage to scam AM into ceding power. It was also adapted into a comic book by John Byrne. A Radio Drama by the BBC was also created, starring David Soul as Ted.