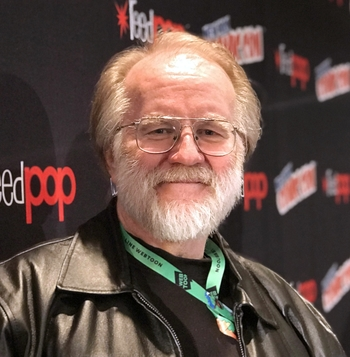 © Luigi Novi
John Lindley Byrne (born July 6, 1950) is a British-American Writer/Penciller/Inker. Has worked for Marvel, DC, and many other comic book companies. One of the best known and influential comics creators (and at one point, among the best paid as well.) He is also fairly controversial, due to his attitudes both with comics fans and pros.
Advertisement:

Not to be confused with the Scottish playwright and artist John Byrne, or with Irish screenwriter for All Creatures Great And Small and Doctor Who, Johnny Byrne.

Works by John Byrne with their own trope pages include:

Tropes common throughout Byrne's comics include: