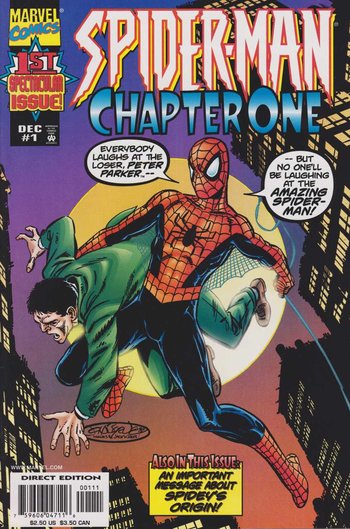 In 1998, the Spider-Man franchise was suffering from the fallout of the overly-long The Clone Saga, and many of the stories afterwards hadn't helped. Marvel Comics decided to reboot The Amazing Spider-Man and Peter Parker: Spider-Man and get John Byrne, still riding high after reinventing Superman with The Man of Steel, to draw Amazing and retell the origin to make it more contemporary. Thus was born Spider-Man: Chapter One, an attempt to retelling the early Stan Lee and Steve Ditko stories with more modern sensibilities.

Chapter One was an attempt to condense the original Lee-Ditko run, and adopted the format of overlapping two-part issues. For instance Spider-Man battles the Chameleon for two issues but the same issue where Chameleon loses also sets up the next villain and so on. It ran for 13 issues, with a follow-up Chapter Two announced but shelved when John Byrne declined to continue it. In either case, the idea that Chapter One serve as a proper replacement to the Lee-Ditko originals didn't sit well with either fans, or creators and even some of Marvel's editors, so even before the series was over, Marvel had stricken it from continuity and restored the original stories.

In either case, the series did serve as a reintroduction to the classic stories from the Lee-Ditko era to new readers who didn't read the back-issues and some of its ideas such as a redesign of Electro with a bluer less ostentatious costume did eventually find its way in Spider-Man: The New Animated Series and The Amazing Spider-Man 2 as did the wider Myth Arc of Peter's early Rogues Gallery formed by The Man Behind the Man which came in The Spectacular Spider-Man.

Spider-Man: Chapter One provides examples of the following tropes: