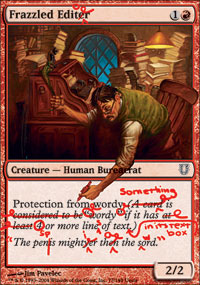 These guys exist for a good reason.
Advertisement:

(This writer can't be blocked, targeted, dealt damage or enchanted by editorial criticism.)

The Executive Meddling we're most familiar with is the sort that ruins stories, characters, and entire franchises. So why, some may ask, does the job even exist? Put simply, because quite often they're actually right, it's just the negative effects of Executive Meddling that are always publicized. No creator is perfect, after all; sometimes they really do make unmarketable stories and other mistakes on their own. Even the best need guidance.

When the creator is first starting out, the editors have the advantage in the artist-executive relationship. The creator's priority is just getting their stuff out there where people can see it, and in order to make that happen most people will acquiesce on the smaller details. The creator has no real leverage — if he objects too strenuously to executives meddling with his "vision", the executives have the option of shrugging their shoulders and moving on to one of the hundreds of other desperate artists looking for a break.

However, if the creator manages to pull off a hit, the dynamic changes. He eventually becomes marketable on star power alone. Whatever he produces is guaranteed to sell, regardless of quality, thanks to his established fanbase.

Not all creators actually appreciate the help they've received from the editors. As far as they're concerned, these short-sighted editors have been holding them back from true greatness. They might not actively think this, but getting a fanbase and thus lots of positive feedback gives some people a swelled head.

Due to editors not being willing or able to fight back against a brand-name star, the resulting new material from an old creator can end up being lower-quality. Sometimes very much lower, as the author's bad habits, Mary Sues, and Author Appeals come to the fore (sometimes to the horrified shock of the creator's fanbase), where before, such excesses would be quickly and ruthlessly excised. The creators get away with it because it'll sell anyway, and we don't want to risk pissing him off and having him bolt for another company.

One informal rule to see if this is the case is whether the author's name is the same size or bigger than the title on the front cover. If it is, you can safely bet the author falls under this trope. Publishing tends to be an industry of marginal profits (the book that sells has to pay for the ten that flop) so when you have an author who sells thousands or millions of copies on their name alone, why would you spend money editing their work?

Protection From Editors can also foster in some minds a feeling that they are also, by extension, given Protection From Critics as well, which results in great displeasure whenever any criticism is raised — even if that criticism is constructive, well-meant, and particularly if it is valid. Expect snide attacks on anyone who dares criticise them to follow.

Webcomics and other online media have a special risk of suffering from this. On the Internet, one can gather a fanbase with no editor whatsoever, and if you start listening to that fanbase praising you unconditionally, you're just asking for trouble.

A common pattern that occurs, especially with recent comic book adaptations is that the first film is either deemed great or at least decent considering the demands made by Executive Meddling. Because the first film was a success, the second movie is given more open range to experiment with. This either reveals that the executive meddling was what made the first movie good or it manages to top itself and be even better. If it reaches a third movie those involved may start to think they are invincible and shows why they needed someone to hinder them a little bit.

Contrast Executive Veto, Executive Meddling, Tough Act to Follow. Not entirely uncoincidentally, many creators with Protection From Editors are also Small Name Big Egos. Mis-blamed might result if the executive is blamed for what it actually the creator's fault. The trope's name is inspired by the TCG Magic: The Gathering, for a card ability that "protects" the card it appears on from something else in the game outlined by the ability itself. ("Protection From X", where "X" in this case is editors.)