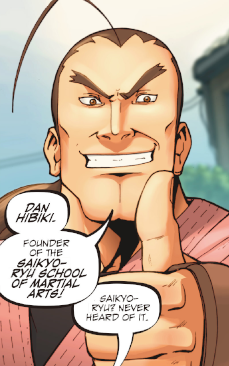 The Streetest Fighter... in his head.
Rhomann Dey: Peter Jason Quill. He's also known as "Star-Lord."
Garthan Saal: Who calls him that?
Rhomann Dey: Himself, mostly.
— Guardians of the Galaxy (2014)
Advertisement:

A (usually male) character with a comically over-inflated image of himself. He thinks he's smarter than everyone else, thinks he's a real ladies' man, thinks he's cool, thinks it's all about him, but both his fellow characters and the audience know that it's all in his mind.

Often occurs in conjunction with a Show Within a Show. If the TV Series runs long enough, the writers usually devote one episode to a Big Ego, Hidden Depths examination of the character.

Expect this guy to be a victim of Pride. Said characters often insult or look down on those who have far more to be proud of and who generally flaunt it less. When they are faced with such characters, whether in a competition or in a comparison of abilities, it tends to be humiliating, and might even be a much needed reality check. Also, don't expect these characters to handle criticism (either of them or of the abilities that they're egotistical about) very well.

If they are the main character on a show, we're dealing with a species of Unsympathetic Comedy Protagonist. If the writers, not the character (though he can fit this trope, underscoring his unpopularity) think the character is amazing, we have the Creator's Pet.

Compare Extraverted Nerd (if the character is a nerd and unaware of it), Miles Gloriosus (if he makes a big deal of how heroic and badass he is, but runs at the first sign of real danger), Know-Nothing Know-It-All (if he claims to be a genius, but is incredibly dim or just misinformed), Giftedly Bad (if he thinks he's a brilliant artist but is actually dire) and Boisterous Weakling (if he claims to kick ass only to get his own ass constantly kicked). Contrast Insufferable Genius (where he actually has the skill to back himself up) or Almighty Janitor. Every Year They Fizzle Out and Fake Ultimate Hero, meanwhile, are when everyone else are the ones with a high opinion about the person in question. Often a Large Ham. In more serious works, he will often be the victim of Break the Haughty. The Smug Snake could be considered a villainous variation, and the Narcissist is this taken to the extreme. Might be a Paper Tiger or even a Dirty Coward. Chuunibyou are often this.

The opposite of this trope is Heroic Self-Deprecation, where the hero actually does have many notable achievements, but doesn't believe or refuses to believe that he is loved by many, and mostly refers to himself in a negative manner. Also contrast Humble Hero, who achieved a lot, but is not nearly that big about it.

Contrast with the Jaded Washout, who knows only too well how pathetic he is. Not to be confused with the other kind of ego. Obviously, given that this is a very controversial trope, No Real Life Examples, Please!

Alternative Title(s): The Ted Baxter, Legend In His Own Mind