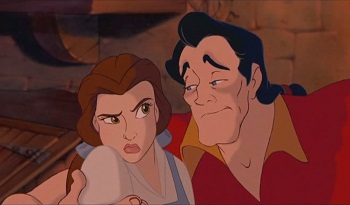 No one refuses to take hints like Gaston.
"You know, Belle, there's not a girl in town who wouldn't love to be in your shoes. This is the day your dreams come true!"
— Gaston, Beauty and the Beast
Advertisement:

A Wrong Genre Savvy Hopeless Suitor who fantasizes that he's the Prince Charming or Knight in Shining Armor who will effortlessly sweep the heroine off her feet and rescue her from a life of dullness and/or misery...all the while ignoring or completely oblivious to the fact that the girl wants absolutely nothing to do with him.

Why can't he see that? Because he's either an egotistical hypocrite long overdue for a Heel Realization or he was Born in the Wrong Century and his ideas of what it takes to woo and win the girl are outdated and insulting. Contrary to what he thinks, she is not Playing Hard to Get and she's not flattered by the fact that I Love You Because I Can't Control You. Nevertheless, he insists he's the answer to all her dreams and hopes and desperately wants her to let him whisk her away to live Happily Ever After, unable to see that he's not a welcome Prince Charming, but an unwelcome Stalker with a Crush.

This trope is similar to the more cynical ways to play a Dogged Nice Guy; both tropes are about well-meaning, sincere love interests with wrongheaded ideas about what constitutes romance and how their object of affection actually wants to be treated. Compare with Casanova Wannabe and Small Name, Big Ego who exaggerate their skills with the ladies and have an over-inflated ego respectively. May overlap with Entitled to Have You if the character thinks their "gentlemanly" behavior necessitates reciprocation.

Not to be confused with Prince Charmless, which refers to literal princes.