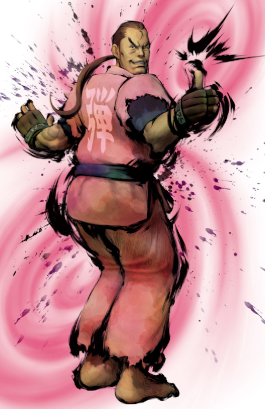 fighter?
Master Tang: I must apologize for Wimp Lo. He is an idiot. We have purposely trained him wrong, as a joke.
Wimp Lo: If you've got an ass, I'll kick it!
— Kung Pow! Enter the Fist
Advertisement:

Characters, often in the form of Easter Eggs, deliberately unbalanced in the negative sense. They mainly have a humorous value and the fandom often likes them due to their sheer awkwardness or strangeness. This is mainly a trope of fighting games. Joke characters are sometimes used by especially proficient players to beat other players, mainly for bragging rights.

Note this is not the same thing as an Easter Egg where the player's appearance simply switches (like a redone sprite) or a Fighting Clown (a character who simply looks silly but plays well). Part and parcel of Cherry Tapping. Compare Blessed with Suck, What Kind of Lame Power Is Heart, Anyway?, and Master of None. If this character happens to have some worthwhile utility, they're a Lethal Joke Character. If they take a considerable level in badass after a while, they have Magikarp Power. Sometimes, if this character becomes popular enough, expect the fans to turn them into a Memetic Badass and the developers to turn them into a Lethal Joke Character.

Part of Competitive Balance. See also Joke Item and Fake Special Attack (which they are likely to use). Contrast with Purposely Overpowered and Master of All, which are the opposites. Compare and contrast with the low-tier Tier-Induced Scrappy, who are also negatively unbalanced but usually unintentionally.

Not to be confused with Parody Sue. Can overlap with Plucky Comic Relief.