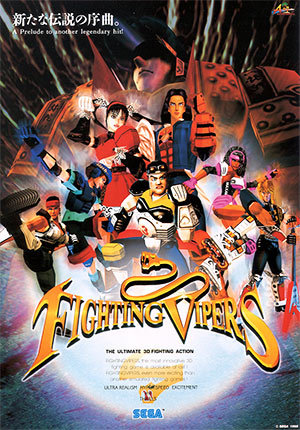 Fighting Vipers is a 3D Fighting Game series created by Sega's AM2 development team (of Virtua Fighter fame) in 1995. A sequel was released in 2001, and in the interim between the two games the casts of both FV and VF appeared in the Sega Saturn-only Fighters Megamix. Gameplay is similar to its sister series, albeit faster, more forgiving in the control department, and has the addition of armor-breaking moves that soften up opponents and create weak points. Unlike the Virtua Fighter series, the arenas are walled, but the walls can be busted down if opponents are slammed against them enough times using the armor-break moves.

The story of the games involves armor-clad fighters run rampant in the metropolis, Armstone City. The dictator/mayor of Armstone City, Big Mahler, hosts a tournament for these fighters ending at the City Tower. The game's main character is Bahn, but Honey (Candy in the states) is the Ensemble Dark Horse and the only really well-known character.

Although it is an obscure game, it is a Cult Classic and Bahn appears in Project X Zone, finally giving the game some spotlight once more.

As of 2012, now you too can experience this gem on your PlayStation 3 and/or Xbox 360 with Sega's Model2 Collection series of arcade games on Play Station Network and Xbox Live Arcade for only $5. And finally, Honey gets un-dummied in this game's cartoony and goofier version of itself starring everyone's favorite blue hedgehog in the Model2 Collection's re-release of Sonic the Fighters.

Not to be confused with Striking Vipers.