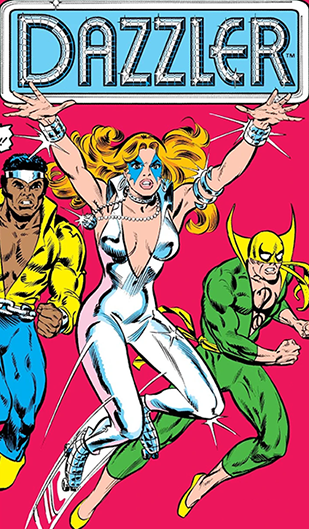 I must be a creature of the night, black, terrible...
a mirror ball on roller skates!
"Printing comics takes a three-month lead time, meaning any cultural fad with its own superhero has been dead at least that long. Now you know why Dazzler debuted in February of 1980. If she'd reached print in the '70s, Olivia Newton-John would have sued Marvel via sexy dance number, but the calendar changed, the thrill wore off, and a mortified America agreed never to talk about what we'd done to ourselves that decade."
— Cracked, "7 Comic Characters who Outlasted Trends That Made Them

A character is created as a direct response to an idea or fad that is currently popular. Naturally, this character might prove schlocky or out of place once that fad passes out of pop culture, unless some writer is willing to take the character out of obscurity and build him or her up into something more.

The Sliding Timescale can have a particularly odd effect on these characters, since it often restricts their debut to only a few years before "now", suggesting that such characters decided to base themselves on, say, a 1960s theme in the late 2000s. Villains who are Fad Supers have a higher chance of being kept, since they are usually intended to be eccentric, out of place, and theme-based.

This isn't the same as an existing hero's ability or story being tweaked in response to the times, such as Silver Age technobabble revisionism. Compare with Captain Ethnic, Cyclic National Fascination, Totally Radical or We're Still Relevant, Dammit!. Contrast with Old Superhero, who is outdated on purpose. Particularly prone to being the subject of Reimagining the Artifact if brought back.