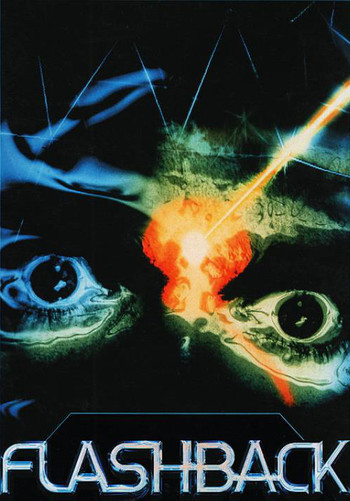 Flashback (also titled Flashback: The Quest For Identity in America) is a Cinematic Platform Game by Delphine Software International. It was first released in 1992 on the Amiga, and then ported nearly everywhere. The story is minimalist, but the game's aesthetic is full of nods to Cyberpunk films such as Alien, Total Recall, The Running Man, Blade Runner, and They Live!.

You play as Conrad Hart, a government agent in The Future. Using a molecular-scanning eyepiece, he discovers alien impostors living among the population, known as Morphs, who don't take kindly to him sniffing around their operation. Kidnapped, his memory wiped, he escapes his inattentive captors on hoverbike and is shot down over a jungle. Upon awakening, Conrad finds a Holographic log of himself with instructions to get his ass to Mars— ...err, New Washington, where his contact is waiting to help retrieve those memories.

Gameplay is similar to Prince of Persia, but with a gun. You get a personal force field generator in the second level that lets you block shots- this, along with rolling, is the key to winning battles. The levels can get quite long, although checkpoints (misleadingly called Save Points) are scattered throughout.

Made by the same company that created Another World, Flashback used a similar method to create polygonal cutscenes and rotoscoped animation that could be played on an Amiga, Genesis, or SNES. It billed itself as "the CD-ROM game on a cartridge/floppy", and was stuffed with cinematics, most notably when you pick up items. Later, it was ported to the CD-based consoles of the era, with a replacement soundtrack and CGI cutscenes. This title still holds the Guinness World Record for top-selling game from a French developer.

A sequel, Fade to Black, was released for the PC in 1995 and for the PlayStation in 1996. This was DSI's first 3D game, and it really shows.

Microids has announced Flashback 2 for a 2022 release.

Flashback is the Trope Namer for:

The 1992 Flashback contains examples of:

The 2013 remake contains examples of: