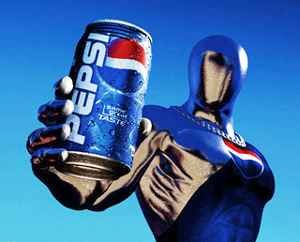 PEPSIMAN!
Pepsiman is such a refreshing guy that he delivers Pepsi-Cola to thirsty people. He can pop up Pepsi-Cola with "Schwaaa!" action and deliver them around everywhere. According to reliable sources, he is a promoter of Pepsi-Cola Company. And Pepsiman is also such an athlete that he is good at all kinds of sports. Especially, he is so into sideways-riding sports such as surfing, snowboarding, skateboarding etc. He is very confident of his physical ability.
— Description on back of package for the Bandai action figures
Advertisement:

Pepsiman was the Japanese mascot for Pepsi in the mid-to-late 90s. In his commercials, which ran from 1996 to 2003, he would run up to people who need a refreshing beverage and give them cans of Pepsi, often suffering Amusing Injuries along the way.

He was the brainchild of well-known art director and graphics designer Takuya Onuki, with ILM responsible for creating Pepsiman's CG animation.

He received a video game adaptation in 1999.

The ads contains examples of the following tropes:

Pepsiman, ready to save the day from the horrors of no Pepsi.

Example of:
Product as Superhero

Pepsiman, ready to save the day from the horrors of no Pepsi.