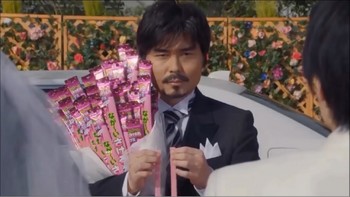 Long Long Man is a series of advertisements for Sakeru Gummy, a Japanese brand of candy. It became famous on the internet for its interesting narrative filled with plot twists, making it half-commercial, half-Soap Opera.

Tooru-san and Chi-chan are a happy couple who love eating Sakeru Gummy candy together. However, their love life is thrown into chaos when they encounter the Long Long Man, who eats Long Sakeru Gummy (which is one long strip of candy, instead of several smaller ones like the regular version). Chi-san finds herself conflicted between her current relationship with Tooru and her love of long things which the Long Long Man can satisfy.

See all of the commercials put together here

. Note that, as mentioned above, the plot goes through a surprising amount of twists and turns for an advertising campaign, so beware of spoilers below!