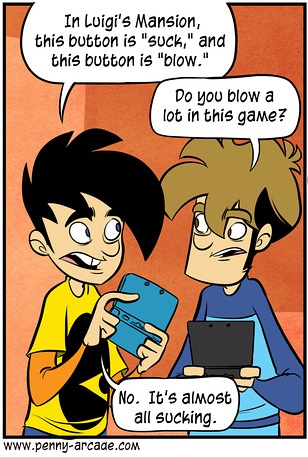 "Oh, man. I've got a big red one down here! We're gonna have to suck him together."

"If I told you you had a beautiful body, would you hold it against me?"
— Benny Hill, Groucho Marx, John Cleese, Britney Spears, Black Mage, and many others
Advertisement:

One of the fundamental types of verbal gag in comedic television, especially the Sitcom.

A Double Entendre is a word or phrase which was meant to be taken in two different ways. Archetypically, one meaning is obvious, literal, and innocent. The other has a usually taboo or sexual subtext. If it is sexual, then it overlaps with Sexual Euphemism.

The Double Entendre's popularity in comedy stems from the fact that if you don't get it, you won't realize something dirty just happened. As a result, clever use of a Double Entendre can keep a show "family-friendly" by allowing children to appreciate the joke on one (non-sexual) level while adults enjoy it on another level.

On the other hand, if the Double Entendre fails to be funny on the obvious level, it can result in a show which is "safe" for broadcast in family time slots but which younger viewers do not enjoy. In other words, the joke has to work well in both ways.

British comedy is especially fond of the device, especially when the joke "works" on both levels. The Double Entendre predates television, of course. William Shakespeare was very fond of this device as well. "Do you think I meant Country Matters? What, shall I lie my head upon your lap?"

If someone makes a Double Entendre, but the recipient fails to see it as anything other than a literal statement, it becomes Entendre Failure. When it's a person's name, than it's a Euphemistic Name. If someone makes a perfectly innocent statement that others interpret as a Double Entendre anyway, it becomes an Un-Entendre. Extreme cases of double-entendre interpretation in-story are Freud Was Right.

Sometimes lampshaded with a wink, a nudge, and/or "if you know what I mean". See also Getting Crap Past the Radar and Something Else Also Rises. May lead to someone saying "Heh heh, you said [x]..." or "That's What She Said".

Of course, as is obvious from many of the examples below, certain ... frustrations will lead some viewers to interpret anything as a double entendre.

Subtrope of Double Meaning. See also Is That What They're Calling It Now?

Jimmy McGill tales a peek at Tony the Toilet Buddy, which is designed for toddlers. He finds it awkward due to the numerous sexual innuendos the voice-over makes, something which the client not only recognizes but sees Jimmy as being offensive.

Jimmy McGill tales a peek at Tony the Toilet Buddy, which is designed for toddlers. He finds it awkward due to the numerous sexual innuendos the voice-over makes, something which the client not only recognizes but sees Jimmy as being offensive.