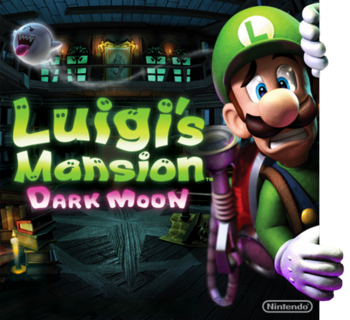 Boo to you, two.
Advertisement:

Luigi's Mansion: Dark Moon (Luigi's Mansion 2 in Japanese, Chinese and European language versions and was tentatively titled as such in the American version) is a video game on the Nintendo 3DS, and a sequel to the Nintendo GameCube launch title, Luigi's Mansion. It was developed by Next Level Games, who previously collaborated with Nintendo on Punch-Out!! for the Wii, and was released in North America on March 24, 2013.

The story finds Professor E. Gadd researching the ghosts of Evershade Valley, but when King Boo shatters the Dark Moon, the formerly friendly ghosts start running amok, and it’s up to Luigi, armed with the Poltergust 5000, to solve this paranormal problem.

Unlike the first game, which took place almost entirely inside the eponymous mansion, there are multiple areas to explore, including a snowy mine and a clockworks in a desert. Luigi has a greater amount of items and power-ups at his disposal, such as a flashlight that can reveal hidden items.

In February 2013's Nintendo Direct, this was revealed as one of several "Year of Luigi" games to be released in 2013, along with Mario & Luigi: Dream Team and the New Super Luigi U DLC for New Super Mario Bros. U.