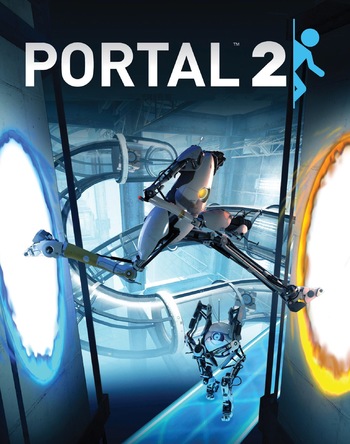 "We're done here."
"Okay, look. We've both said a lot of things that you're going to regret. But I think we can put our differences behind us. For science. You monster."
— GLaDOS
Advertisement:

Portal 2 is a sequel to the game Portal. It picks up the story of Chell an unspecified number of years after the events of the first game. The Aperture Science Enrichment Center has fallen into ruin, and Chell is awakened from cryogenic sleep by Wheatley, a talkative Personality Core who needs her help to escape the lab. While roaming the remains of the facility, the two accidentally repower GLaDOS — who is, needless to say, not too happy to see Chell again. GLaDOS puts Chell right back into a series of test chambers while she works on getting the Enrichment Center to rebuild itself, while Wheatley continues to attempt to engineer an escape.

During the course of the game, much is revealed about Aperture Science's backstory — as well as the backstory of its founder, Cave Johnson, and several other characters. The game introduces new environments, including the ruins of the Enrichment Center from the first game, the abandoned facilities of the original Aperture Laboratories, and a haphazard and idiotic renovation of the modern test chambers. While the game is still fairly linear, it offers a lot more room for exploration and many puzzles involve getting from one test chamber to the next, not merely solving the challenges within.

The two-player cooperative mode deserves its own mention, as it isn't simply a retread of the main game; instead, it takes place in a different set of test chambers with a separate plot and fresh revelations about the world of Aperture Science. The playable characters are not humans, but instead a pair of robots named ATLAS and P-Body that were created by GLaDOS as "the perfect test subjects". (ATLAS' design is based on a Personality Core, while P-Body's is based on a turret.) The co-op mode ups the ante significantly in terms of the complexity of the puzzles, thanks chiefly to having two extra portals to work with.

New gameplay elements include Thermal Discouragement Beams; Hard Light Bridges; Aerial Faith Plates that hurl you through the air; the Repulsion, Propulsion, and Conversion Gels; Excursion Funnels; and the myriad ways which the player can manipulate these new elements with objects and portals.

Unlike the first game, Portal 2 is a full-priced game, but the single-player campaign runs 2-3 times as long as in Portal, and the co-op is similarly paced.

A co-op and challenge DLC pack entitled "Peer Review" was released on October 4th, 2011. The DLC allows players to perform a Speed Run in each map and compare their results against their friends' records. In co-op, a new group of test chambers are present to further challenge players and a new plot is introduced for it.

A second DLC pack entitled "The Perpetual Testing Initiative" (PeTI) was released on May 8th, 2012. It allows players to design and share their own test chambers through a new creative mode built into the game. These player made chambers can then be used to play through a pseudo-single player campaign about Cave Johnson sending test subjects to explore (and steal from) Alternate Universe versions of Aperture Science. Instead of playing as Chell, the player character is one of the generic stick figures featured in the Cave Johnson trailers, officially named "Bendy".

Portal 2 contains examples of these tropes:

Example of:
When Life Gives You Lemons...